New York to someone who doesn’t live in..." /> A Burger with Jon Berger* - Antifolk 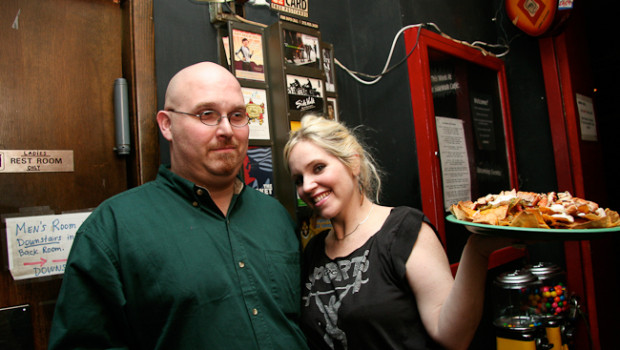 New York to someone who doesn’t live in the city is like the Super Mario level made just of coins – it seems magical, easy, fun. Collect 100 coins and get an extra life. Of course the reality’s more prosaic, life just happens, things aren’t perfect, like Schwervon!’s ‘Boat Song’ which features the protagonists realising they’re not taking advantage of the city’s delights only to wind up having a miserable day getting wet on the Central Park boating lake.

I’m sure outsiders have a similar view of London, but after March/April’s extended period of subzero temperatures all us Brits have not been enjoying I’m very glad to arrive in Mario Land. I haven’t been here since the UK antifolkers made the big trip in 2005 to play The Winter Antifolk fest at the Sidewalk, though this time I’m here for work –I’m giving a talk about money laundering in Central Asia at Columbia University. Crazy but true.

Still, I’m determined to fit in some antifolk and I’ve made a date with Jon Berger, one of the mainstays of the antifolk movement since the mid-90s, both as a fan (Berger ran AntiMatters, a zine from 1996-2000), a performer of poetry and as a leader of his own band, JUANBURGUESA.

I exit my hotel thinking that now I’ve left behind London’s ice I don’t need a scarf and gloves. One Homer Simpson jump cut later and I’m being buffeted by whipping winds and driving rain as I’m heading up the Upper West Side. Still, my excitement is undiminished, everything looks beautiful even through rain-dashed spectacles. Jon’s waiting for me outside the diner where we are meeting. He looks the same as in 2005 which is reassuring – it’s not 2013 after all.

We get settled and our waiter, Juan, recommends the Long Island Ice Tea. “I had three of them recently and ended up in the hospital,” says Juan, laughing. Jon accepts, but declines Juan’s offer of “a strong one”, perhaps thinking that being attached to a drip shouldn’t be part of his Sunday plans.

Jon grew up in New York, and now lives in the Bronx. He was in his early twenties when he discovered antifolk. “I first entered the Sidewalk Cafe right around the time that antifolk did. There were stories all over the walls. Lach had posted articles about antifolk all over the place. That’s what intrigued me about the place: an inherent sense of history, even though it had barely just started at the Sidewalk. The location was maybe six blocks from CBGB, and I thought that antifolk might be the little sister scene to the Punk scene. I was hooked.”

Jon has been a regular at the Sidewalk since then; he didn’t start performing until 1998, though he’d been a regular part of the community for years at that point – and has even been called the MVP [most valuable player to you non-US sports fans] of Antifolk. “I like that. You could say I’m like Antifolk’s Assistant Principal – not the boss, but someone near the top.”

We talk a little about Manhattan, and whether in light of the rising rents and chain-store ubiquity, the place is as vibrant as it once was. He talks a little about the pressures on Manhattan venues, mentioning the Sidewalk’s recent five month closure. The venue is open again, in time for the 20 year anniversary of Antifolk’s first appearance there. Jon still goes to the Sidewalk but “antifolk’s a little more geographically diverse now. What people call the East Village isn’t the centre it once was. Pete’s Candy Store [in Brooklyn] has been popular, Goodbye Blue Monday [also in Brooklyn – in the up-and-coming Bushwick] has a good open mic. I’d been hearing a lot of talk about the Lab – but it was shut down before I could get over there.”

I ask about the Sidewalk’s famous anti-hoot open mic, and how it has been since Lach (founder of the anti-hoot and booker for many years at the Sidewalk) upped sticks to Edinburgh. “It was perhaps a little more entertaining for the audience with Lach, he was less polite. With Ben [Krieger, current open mic host/organiser] it’s a little better for the performer.” And as for Lach himself? “He’s a mixed bag, I gotta say. I’m certainly a zealot for his religion.”

Our food arrives. The portions are 16 times larger than in the UK – which might explain the size of my dining companion, as Jon freely admits. I like this place. Juan chats some more to us, maybe too much – I’ve got a lot of food to get through here.

I bring up the often discussed question of whether NY antifolk is “as good as it once was”, seeing that a lot of the big figures from the generation of 2000 – Major Matt Mason USA/Nan Turner, Jack Lewis, Grey Revell – have all moved from New York. Jon waves the concern away. “I don’t give credence to the ‘golden generation’ of 2000, as if it’s the only generation. You gotta remember, I starting getting involved in antifolk around 1994, so I’ve seen a lot. The class of 2000 is well into the history of antifolk. There’s an entire universe of mythological stars who were already done by the glorious class of 2000 – like Beck or Michelle Shocked, or Roger Manning. And every generation says that their period was the best. What happens is they stop going to shows for a while, and when they come back, a lot of the people they used to hang out with have also gone. It’s unlikely you’ll find it the same as when you were around. But it’s not worse, just different. As to the 2000 generation, they’re just more known because of Antifolk Vol 1. [a CD issued in 2001], but they’re not necessarily better. I like Jeff Lewis, but the Moldy Peaches – not so much. I told Adam Green to go back to school, ‘you can pursue this rock stuff later’. He didn’t listen, and I thought he was a fool. A few months later, Rough Trade released The Moldy Peaches. Who’s the fool now?”

For Jon, 1994 was the magical period, as this was the year he started going regularly to the Sidewalk. “The walls seemed a little smaller back then.” Jon still performs, but not as much as he used to, usually taking only shows by request, rather than going out and actively looking for places to read. He describes his style as “poetry shock and awe,” beating the audience into submission. “I read poetry – aggressively. I really don’t sing. When I play with musicians – which is rarely – I will usually recite poems, sometimes in rhythm, usually not, and they will play verse structures behind me. Then we go into a chorus and I shout or dance or something.” His band JUANBURGUESA, however, is on a perhaps permanent hiatus – Jon cites the difficulties of leading, organizing, and generally telling bandmates what to do. “I’m not good with conflict.”

I ask him what have been his favourite acts over the years. “Ed Hamell is the single best act I’ve ever seen. His success doesn’t represent his talent. Other people grow on you. Early on, I went to this Regina Spektor show at the Sidewalk, and she was already getting a little bit of attention, but this was well before she got management or anything. I’d seen her at the open mics, and had been intrigued enough to go to the show. Well, it wasn’t long before I had a tear in my eye. And then a few others. I was crying at her show, because I was so bored. I was bored to tears at the Regina Spektor show, but I stuck it out. But she’s grown on me a lot since then. I saw her play the Beacon Theatre, and was amazed at how her music was so moving to so many. She’s quirky, and unique, and I really like what she does now. Maybe I got brainwashed.”

And who now? “Jesse Cannonball Statman, definitely. He’s just out of his teens, hard to work out, like a genius with learning difficulties. His style keeps changing – he should be big.” He’s the second person to mention Jesse in as many interviews. “I also like Grey Revell. He coproduced and cocreated my last album – it’s spoken word with backing tracks. I called it ‘Grey Revelations’ which he objected to!”

I order a piece of Tiramisu – Juan dutifully gives me a slice the size of my head, but goes off duty, and so won’t see any of the tip. Pity, I wanted to make a contribution to his Long Island Tea induced hospital bills – he probably can’t afford insurance as a waiter.

Jon and I talk a little about the ways of London gigs v New York. In London, there’s usually a cover charge, but even then bands that have been playing a few years will often get none of the door, especially when certain promoters are in charge (R not IP Monto). In New York, there’s not usually a cover at the venues antifolkers play, though the ‘hat’ is passed round for tips after the performance . “I’d feel bad charging my friends, especially when there’ll be another gig in a few weeks which will be free,” says Jon.

I’m tempted to get another cocktail, and the conversation’s good, but I think that I really should go and write my talk at Columbia. Another cocktail and the Financial Action Task Force’s recommendations will make even less sense than they currently do.  We leave a few notes and coins for Mario the busboy who’ll be getting the tip in lieu of Juan.

Jon and I shake hands and I head back into the icy winds. Will he be here in 2021 when I return to give a lecture on banking secrecy? I hope so. Antifolk needs its MVP.

*He actually had pancakes. I had chicken shish.