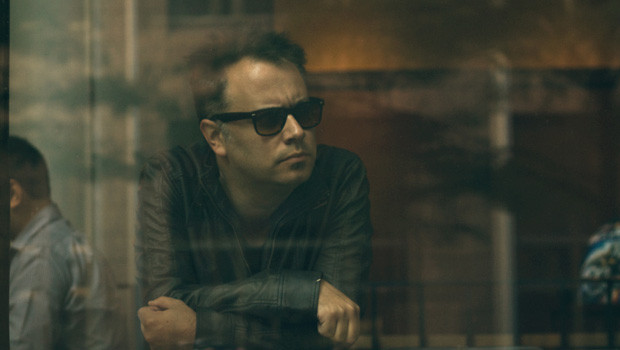 Filthy Pedro interviews Grey Revell to find out what makes him tick, and finds out he used to be a raver.

Grey: Yeah I grew up in the San Gabriel Valley, about a half hour out of LA proper

Filthy: Is it a nice place?

Grey: I think so now (lol), when I was younger I had all the suburban angst and all that. It is pretty damn quiet. There’s a touch of that “quiet desperation” to coin a British phrase. Lots of ways to get into trouble I guess if you look for it, but all in all I had a pretty standard childhood.

Filthy: When did you first get into music?

Grey: I got obsessed with the Beatles when I was about 11, and that touched it off. All through my early teens I was nuts on British Invasion and all that Classic stuff. There was a GREAT rock station growing up in CA, KLSX. All the old seventies DJ’s were on it. I learned a lot.

Filthy: Was it all 60s invasion, or did you like the 70s British stuff as well?

Grey: My 70s deal was the Glam stuff going into the punk scene Roxy Music, Early Sweet, Mott. Going into Buzzcocks and Magazine.

Filthy: Why did you move to New York? How old were you then?

Grey: I was 24. It was 1998. I had been in a band for two years and we had played all over southern california, we opened for Blue Oyster Cult! (pre cowbell). We were a good band, we wanted to be the Chameleons UK (lol), which in sunny Skater California you can imagine went over REALLY well.

So after that kinda frittered out I wandered around CA for a couple years, got wrapped up in late 90’s Rave culture for a bit, lotsa fun that, salt dough handprint then one day I lost like my tenth job in a year and said “fuck this – it’s time to change it up”. Europe seemed like a remote unreachable place to me at the time, being pretty broke, so New York seemed the best place. I had read Miles Davis autobiography, and was really crazy on Television’s “Marquee Moon” at the time. I sold my car to my dad, had about 500 dollars, got on the Greyhound and there ya go.

Filthy: What type of Rave music did you listen to?

Grey: Aw man, I was big into Lamb from Manchester, and Gus Gus! Of course Massive Attack and Aphex were big on our list. Crystal Method were great cos they were kinda ours being from the southwest, like an American Chemical Brothers. Some of the rock stuff at the time was great! we would chill out to the Verve, they were big favorites of mine.

Filthy: Did you get into the whole Ecstacy, MDMA, Speed scene that went with Rave? Was there much of that in the US?

Grey: A lot of it, not so much Speed for me, but yeah E? totally. It was actually a really positive time for me, a lot of stuff got worked out.

The fun thing about my friends was that we did all that but we were also big into Jazz and that sort of deal, we kinda bridged the Ravers with the Beats, it was cool. I have a song on my first album “The Forever Kids” that’s all about the scene here.

Filthy: How did you get involved in the Antifolk scene?

Grey: Well I was in NYC about two weeks and hadn’t found anything. I was wandering the west village wondering where the freaky people were. I was surrounded by affluent upwardly mobile salt dough ornaments gay men and little white dogs (lol), I was like “man this isn’t what I read about, where’s the people Tom verlaine was singing about?”

So i went into this place called the Kettle of Fish because I had read about it in a Dylan bio
and I was like “so when’s the music”, and the bartender was like “man we haven’t had music in here since 1982”. On a napkin he wrote “Sidewalk Cafe, 6th Street and Avenue A” and he said there’s an open mic there tomorrow, go there, you won’t be disappointed, and man I tell ya i sure as hell was not.

Filthy: Who was involved in the scene then?

Grey: Well let’s see, Jeff (Lewis) showed up literally the week after me, though undoubtedly he was hanging out there way before i got there. He lived across the street from there. Lach was there of course, Joe Bendik, Mike Rechner was there (pre – prewar yardsale) and Joie Dead Blonde Girlfriend.

Filthy: The New York scene around 2000 is considered a bit of a ‘golden generation’, with so many great artists around at the same time. Would you agree with that?

Grey: Yeah I would. It all Play Dough Recipe came together in a really short time, and there was nothing but pure creativity happening at all times. It was really something to be in. I mean, man, I was there when Adam Green sang in Sidewalk the very first time. No Kimya yet, she was en route. He did that “Lucky #9” song and “Steak for Chicken”. You knew he was gonna be around a bit.

Filthy: Maybe that feeling was because of the success of the Moldy Peaches, but Rough Trade’s Antifolk Vol 1 is the most popular Antifolk compilation to date, and that raised the profile of the scene. How did your involvement with that come about?

Grey: You know man, i got a call from Kimya she said “hey we want Gone Gone on the compilation”, and I said ” wow awesome thanks” (lol). They had come to my shows for a year and were always so cool to me. Adam wrote me a poem on my birthday and it was recorded somewhere it salt Dough Recipe was the nicest thing anyone had written for me, I wish I still had it.

My son’s mom is on that compilation too. She’s Patsy Grace. That comp disc was really special, it was kinda like a yearbook for that moment and that particular class of Antifolk.

Filthy: Are you still in contact with the class of 2000?

Grey: Happy to say yeah as much as possible I guess. I’ve got a christmas present for Jeff (Lewis) I still need to get to him. I talked to Kimya a couple months back, and my son’s mother of course. You know that baby on the back cover?

Grey: Right in the middle of all those freaks, yeah that’s him, ha ha, poor guy.

Matt Mason, Barry Bliss, all those cats. If I see them we always have a smile for each other.

Filthy: We’ve had a few from that era over in Britain to play antifolk events. Lach lives in Scotland now, Brer Brian has been over a few times, Ish Marquez is in London at the moment. We’ve had Major Matt Mason and Dufus over as well.

Grey: Brer and Ish in particular have really special places in my heart, those guys man, I love them.

Brer’s our Thelonious Monk, Ish was our Bird Parker (lol). I don’t see them enough, man I do miss them now that I think about it. Ish writes me every so often and Brer calls. Brer would always call me from a payphone to rant about some crazy thing he was in, and the call would inevitably get cut off. It became a running joke.

Filthy: Having ‘Gone Gone’ on that compilation led to you being on a Spanish Hewlett-Packard advert recently.

Grey: Yeah, a nice little boon from the cosmos there.

Filthy: Was it a Spanish or American advert?

Grey: It was Central American and it’s kinda jumped over to Eastern Europe last time I checked.

Filthy: Have you gained more interest in your music on the back of it, or just a nice little pay cheque?

Grey: Oh both really. The pay was nice, it helped me square some stuff that had been on my back forever, and it paid my sons braces! Yeah i’ve gotten some really positive attention particularly in Argentina and Peru, go figure. Brazil too.

Filthy: Do you make enough money through music, or do you have a more conventional day job?

Grey: Well right now I’ve got this nice little studio here in my house, and I record a lot of the local talent. I teach music a bit here and there, that pays the bills for now. I did take a bit of a holiday the last couple months, so it’s time for me to get cracking again. I’ve got a songwriter seminar in April they asked me to do something for.

Grey: Yeah been here for the most part since 2005. We evacuated here from New Orleans that summer from the whole storm thing, spent about six months in New Orleans in 2007 but once it was obvious that the wheels were off the marriage I came back here.

Grey: Yeah, it was funny. We were on the way back to NYC actually, and my father in law at the time was saying to my wife “why are you gonna go all that way? your brother lives in Charlotte?” and there ya go.

Filthy: There is quite and Antifolk community there, isn’t there? Doesn’t Paleface, Charles Latham, Brad Willins (author of Anti-up, a now defunct antifolk zine) live there?

Grey: Charles is in Chapel Hill I think. Brad just moved to Texas I think, but yeah he was here. Paleface, yeah he’s about an hour north of me.

Filthy: Charles was studying over here when the British scene was in the early stages. I thought he was a talented young fella. How is he doing now?

Grey: I played with him in 2006 here in Durham, he was a great guy! I think about him from time to time. I hope I seem him again, very good writer and performer. I’d love to record him.

Filthy: Are there any other Antifolk connections with North Carolina?

Grey: Well I’ll tell ya – there are some great performers here. I work often with this guy goes by the name of Fountain Penn. He is most definitely Antifolk, and really good.

Filthy: When did your latest album, I Don’t Leave Friends in Darkened Houses, come out?

Grey: That came out last November. It was coming up on a year that I had lost a really close friend of mine, and I wanted to do a little something to commemorate that. So I put this single together when I was off the road with Paleface (which turned out to be permanent), so I got a couple guys together and recorded it. It turned out really good.

My friend had always believed in what I did so I figured the best way to say “thanks I love you” was to make more music.

Filthy: I’m going to end on the question everyone from the scene hates. How would you describe antifolk?

Grey: Lol, well for me: Antifolk was and will always be an opportunity for anyone to get up and make a ridiculously holy racket, whatever that entails. An opportunity to become you on your own terms with all the rewards and consequences.

5 Responses to Grey Revell talks about life, antifolk and the class of 2000