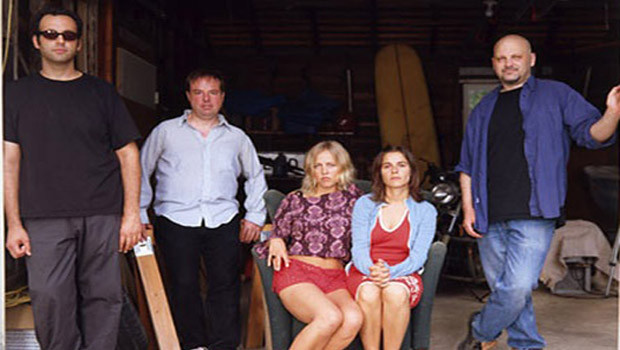 It’s 3am on a Monday morning and Tom Mayne interviews Andy Ras Vegas of the Sprinkle Genies, stalwart of the New York antifolk scene…

What does antifolk mean to you? Is it a sound or more a community?

Over the years, I have given that question considerable thought and I have come to the conclusion that antifolk has meant different things at different times all depending on the circumstances and context in which I find myself. Right now, my feelings are twofold – on the one hand, antifolk is a community of artists that support a certain DIY ethic that gives one the space to create music and spoken word with more fluid boundaries than those of other creative scenes. For example, the poet, Jon Berger and the acoustic punk folk rocker Joe Bendik have very different sounds yet they are still considered to be antifolk artists. On the other hand, antifolk also means an off kilter acoustic guitar player who emphasizes message and spirit over technique.

What are your main influences?

The Sprinkle Genies draw inspiration from early Stones and Dylan type stuff as well as punk bands, like the Clash as well as a few others that came later like Murphy’s Law and Blanks 77. Oh, and let’s not forget the highly influential original Broadway soundtrack to Hair . None of us grew up in the city and in the pre-digital age there was very little access to music in the suburbs. Maybe you owned some vinyl and got to see a live band at a school dance or some huge show at Madison Square Garden. The last train back to the suburbs left NYC at 11pm or something like that, so forget about going to clubs, it was not even in the salt dough handprint realm of possibility. As a result, we were forced to use our imaginations and make something up in our parent’s basements. There were so few musicians that you had to talk a non-musician friend who did not play drums or bass into playing … something, anything! The result was this weird half-baked sound that we still love and aspire to create today.

Who is in the band at the moment?

The Core Sprinkle Genies band are currently Andy Ras Vegas (Vocals, Guitar), Ananda Sunshine-(Vocals, violin, buckets and other assorted percussion), Erika Simonian (Vocals, guitar mandolin bass, percussion), Steve Bag (Vocals, bass, guitar), Steve Espinola (Keyboards) and Richard Heaven (Drums). In addition to the core members a few people play with the band from time to time. Debby Schwartz sometimes plays guitar and does vocals and Ray Sapirstein plays trumpet and cornet. Ananda and Erika have kids now so as soon as they get a little older we will get them in on the action.

You’ve been going for nearly 20 years. What keeps you keeping on?

Well we don’t get to play as much as we used to, but why stop? It’s like breathing you just do it because you have to, I guess.

How did you meet Lach?

Steve Bag and I were producing a very early white rap group called “40 Dog” right around the time the Beastie Boys signed with Def Jam. We were working out of Baby Monster studio and Lach was there at the same time working with one of the guys from The Washington Squares.

Give us a random memory from the early days.

Two of my earliest memories are salt dough ornaments meeting Roger Manning in the office of New Route magazine and hearing Lach in the studio singing Anarchy in the UK: but, instead of singing “I wanna be Anarchy” he sang “I wanna be Antifolky”. It was just goofing around but for me it was my first acquaintance with the term antifolk.

What did you think? That it was something you want to be involved with or were you a little unsure?

I thought the scene looked very cool. I remember being a little intimidated before the first time we played at Sidewalk and expected to get some heckling. I figured I would beat them to the punch and baited the crowd a bit. Could not have dreamed of a better response everyone was very supportive and it quickly became our favourite place to play.

For performing music, what’s New York like in 2013? Is Manhattan dead? Do you still play at The Sidewalk? What are the new venues to go to?

Manhattan has become a little scary with the invasion of 7-11’s, chain drug stores and banks. We still play Sidewalk a few times a year which remains a great place where the sense of a cohesive scene Play Dough Recipe persists. A lot of the antifolk action has moved to Brooklyn to places like Goodbye Blue Monday and the LAB Space. Many of the rockers from the old CBGB’s and Continental scene now hang out at Otto’s Shrunken Head – they’re another crowd we mingle with from time to time.

A lot of the famous “antifolkers” no longer live in New York – Jeff Lewis, Lach, Kimya Dawson, Matt Mason/Nan Turner… Do you see a new breed coming through?

There is always a new salt Dough Recipe breed and even a band that has been around for a while will always be new to some people. I saw Jessie “Cannonball” Statman for the first time the other day. He performs what I think of as the real classic absurdist antifolk sound. He played a DIY enhanced guitar with the effects pedals where the pickups are typically placed and his lyrics appealed to my antifolk sensibilities.

I just checked out his soundcloud (https://soundcloud.com/cannonball-statman) Nice. Name some of your other favourite “antifolk” performers.

Well there are tons of artists I enjoy but to name a few — Kung Fu Crime Wave are amazing, we met them a few years ago at the OJ All Day Festival. Schwervon are always mind blowing. Steve Espinola puts on great show and writes excellent songs. He’s also The Sprinkle Genies salt Dough piano player.

A lot of the UK antifolk guys are pretty strange individuals. We’re all “losing it”. Do you see the same thing in New York and its community?

I guess it really comes down to the fact that most people are pretty strange to begin with, and then when you take into consideration that musicians as a subset of the general population are stranger yet, plus antifolkers a subset of musicians tend to rachet up the strange factor a degree or two then it’s pretty safe to say that most antifolk cats are strange – in a good way to a good end.

Where should antifolk fans go to get a good taste of Sprinkles? Hit us up with a few links.