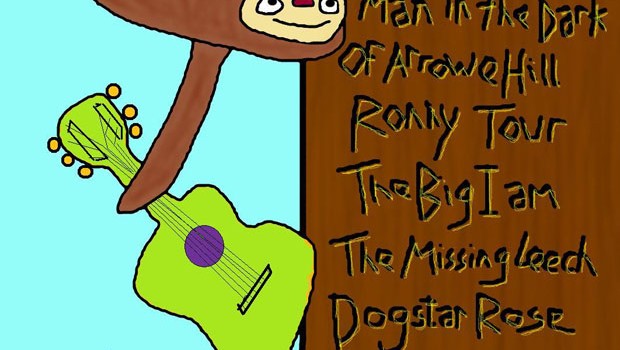 The first time I saw Lach… It feels like it was 10 years ago now. In reality it was either in 2006 or 2004. (I’ve never been good at timescales) It was in the Camden Barfly and I was a young man who had just dumped his girlfriend for the sake of going out into the crazy depths of London for a week long bender on JD and coke and other substances I won’t care to mention… I was terribly rock and roll at the time.

My friend told me about something he’d heard on one of those radio stations that you only get in London; one where I’d phoned up and correctly answered Mark ‘E’ Everett’s full name thus winning the then new Eels album ‘Shootenanny!’

That was released in 2003. Maybe I’m getting mixed up. Around that time I put a load of magic mushrooms in a cheese sandwich on the train back to Liverpool and I thought that it was taking off. The people in business class weren’t too impressed. So that probably means it was my birthday. So I probably saw Lach around October 2004. There.

The important thing is that I saw this guy stood on stage rocking the acoustic guitar like a motherfucker. The backing band were part-punk, part-country, part-skiffle, part-funk – All energy. And all the while there was this defining factor of some guy from Noo Yawk thrashing out some solid
songs on an acoustic geetar. Amazin.

After the show I had to talk to this guy and get some of his CDs (remember them?). He was kind enough to chuck in a ‘Lach & the Secrets’ T-shirt because I had already spent my hard earned 5 pounds on a JD and Coke. This T-shirt was later thrown away by an ex – she said it looked like a creepy man was molesting my man boobs.

Fast forward to wherever we are now.

The price of alcohol in Liverpool is probably the same as London circa 2004… I now have less hair. The man boobs are still there. But the most important thing is that I now play my acoustic guitar louder and harder than ever owing to what I saw that day whenever it was. It’s taken me a long time to get my shit together… But at the exact time that I have, I stumble upon the man himself playing in the most raucous, off the radar, rock n roll joint in Liverpool.

I told Lach we had to play with him. That the people of Liverpool are ready for the Antifolk. No more scenesters and the oh-so-cool hipster irony that we wear like a fake mask of indifference. Let’s get up there are play a song from the heart and be shameless about it. And let’s not worry if our voices crack or our fingers slip or sweat gets in our eyes and makes us fall over and nearly break our wrists. Let’s get on with it and do things and listen to others doing things and respect their SHIT.

Frank Hedges has teamed up with Lach to offer Lomax as the venue for this forthcoming Antifolk fest on Dec 9th 2012.  Lach and Frank have been calling all the oddballs and ne’er do wells out from their bedrooms and slumber onto the stage. The lineup has grown daily as more rough diamonds are looking to shine.

The line-up so far is:

Lach
Man in the Dark
Of Arrowe Hill
Ronny Tour
The Big I Am
The Missing Leech
Dogstar Rose
Rory and Ned
NightHowl.

There may well be more to come as the list keeps growing! At a lovely price of £3, people will be able to see the best Liverpool has on offer in one of the most accommodating and friendly environments around.

That doesn’t sound very rock and roll though does it?

COME ON DOWN AND GET YOUR HEAD SPAT ON.

Joe Surly is a member of Man in the Dark, a Liverpool based Antifolk outfit.