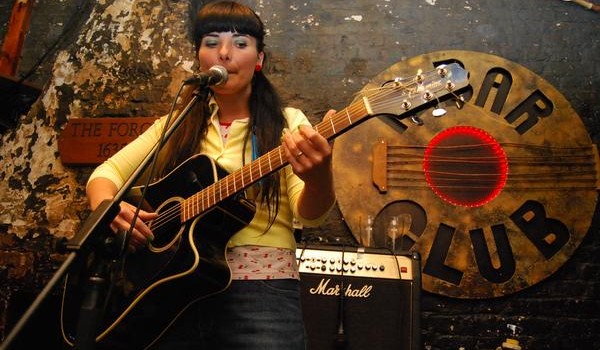 If the definition of festival is ‘having a good time with much revelry, jocularity and possibly hilarity included’, then the spring antifolk jamboree (come ‘mutiny on the bounty’ style insurrection) did nothing to counter that supposition.

From start to chaotic finish the nefarious congregation kept me rapt and entertained like an agitated schoolgirl dropped by parachute into a surreal Alice in Wonderland type landscape for lessons in bohemian excess and abandon.

So how does the antifolk festival differ from other festivals? Well for starters there’s an almost despotic disapproval of all things sober and restrained. Not that other festivals are a temple of sobriety but this one in particular holds no boundaries for irregular and exceptional behaviour of all kinds (“that’s not very rock in roll” the barman harangued me when I started off the evening not with my usual gin but with a half pint measure of limited toxicity. “Yes, well, sorry” I replied, suitably chastened).

Another source of singularity is the claustrophobic intensity of the setting; the 12 Bar leaves no place to hide for the introverted initiate or the mouse-like persona. Unlike other recent corporate-sponsored festivals, there are no bouncy castles or chill out spaces to detract from the musical onslaught. Just a subterranean bunker with a loud, shouty scatological comic comparing a night of drink and debauchery, with some of the most bizarrely named bands you have ever heard of sharing in the scrimmage.

The appropriately named first act is a good-looking, quite serious young man with obvious ambition (and not totally unpleasant to observe, depending on your gender and/or disposition). His songs are kinda interesting too and I’m sure there’s a lot more to come from him.

Next up comes ‘Naomi hates Humans and The Insufferable Fucks’; one of those oddly named bands I previously mentioned, whose misanthropic moniker is slightly less than enticing when first apprehended on the programme. However, the titular Naomi has a gravely, throaty, earthy intensity that reminds me more of an authentic sixties torch song icon than an offbeat, irreverent, outcast/insurgent (as do many of the other acts on the bill).

Janis Joplin mixed with a smidgen of Alison Moyet and Eartha Kitt perhaps. The real thing, rather than the post-modern equivalent. In any case her tales of social deprivation and injustice indubitably recall another era’s zeitgeist, confirming the miscellaneous nature of the acts on offer throughout this festival.

The Big Fibbers are big fun. Their songs are touching (‘Booze, madness and the ghost of love’), relevant (‘I want to be normal; why can’t I be normal?’- a song that pretty much everyone in the room can identify with I speculate), and not least, nostalgic (‘I scream/You scream/beside the seaside…sorry, I didn’t catch the full title).

The lead singer’s t-shirt pays homage to the Monster Raving Looney Party and it occurs to me that the festival itself could be construed as a fundraising enterprise for the aforementioned cult of eccentricity, flippancy and downright recklessness. Great British eccentrics they are, with medieval, Shakespearian feel to their merrymaking.

I went to see King Lear at the Globe recently and some of Tom O’ Bedlam’s rantings and ravings were not totally dissimilar in theme and import. They are the latter day Chas n Dave of anti-folk you might say, with a liberal dash of Keith Floyd thrown in.

Um, I’m not sure what to say about this set, except that I don’t somehow think that I’m the right type of reviewer (i.e. being of the XX biological designation) to give a totally unbiased description of its good and bad features. I just don’t think it was aimed at the female part of the audience, that’s what I’m saying; what with all the songs about the perils of dating girls with big arses and slovenly personal grooming habits.

Not that I object to grittiness and authenticity in song writing but there’s anger, piercing honesty, then downright unpleasant grossness, and the subjects under musical discussion on this occasion seemed to veer strongly towards the bottom end of the spectrum, excuse the pun. MMM.

Everyone tells me that Milk Kan are one of the shining bright hopes of antifolk on the broader commercial scene, so my hopes are high as the proverbial kite before this set. Luckily for once, my hopes are not dashed cruelly against a 10 feet brick wall and shattered into a thousand smithereens. In fact I loved it exceedingly.

The entire room seemed animated and enlivened and spurred into spring-like action (despite the miserable claggy weather being experienced outside). Even Mr Filthy Pedro himself was seen to be strutting his stuff during the frenetic rendition of ‘God with an ipod’, a song that epitomizes the eclectic literary referencing and lyrical maturity on show throughout the set.

First of all I have to apologise to Filthy because for about 75% of his enthusiastic and vigorous set a befuddled and perplexed Irishman was quizzing me in quite some depth about the meaning, import and derivation of the term ‘anti-folk’.

To be honest it was a bit of a struggle didactically to contain and explain the entire genre in a couple of condensed sentences (especially as I consider myself to be in no way a particular expert on the subject) at the same time as attempting to pay due attention to the music in progress, but I eventually managed to disentangle myself from what was turning into quite a high-brow conversation, just in time to catch the debut of a new song which seems to centre around an appreciation of Superfoods, broccoli, carrots and the 1980s chronicles of an fugitive antique dealer, Lovejoy.

To the sweetly named Mertle I would like to give a big hug because by the time her set got going there seemed to be a decidedly disruptive element in the audience that diverted her attention and undermined her confidence to quite an elevated degree. Which is a pity, because her songs, including what seemed to be an audience favourite, ‘Splish, splash, splosh’, were funny and touching and well worth paying attention to.

All in all the bit of the festival I was present for was the usual whirligig vortex of the sublime and the ridiculous and the moderate entry fee would be more than worth it for anyone else considering sampling future events. Just don’t come expecting anything in anyway mainstream or ordinary.

If you like car crash telly and have what some people call a ‘unique’ or somewhat ‘special’ outlook on life, then you’ll be more than at home here.