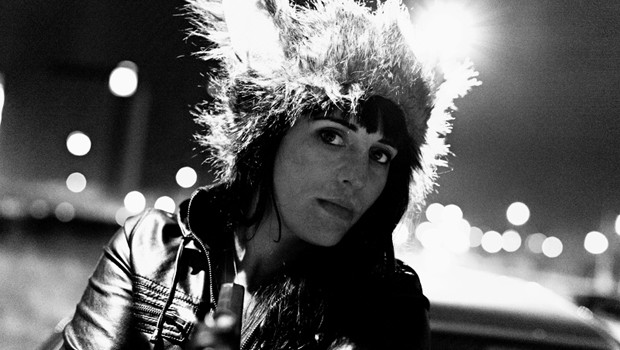 French musician Pauline Andrès plays guitar and writes stories about drunks, working men and hipsters, even if she admits knowing less about the latter. She sings about hangovers, the hunt for a home, Russian fairytales and sometimes murders too. Born in a French miners town on the border in a mixed family, long trips across Europe were part of growing up.

Listening to rock and country music too. “I’ve always related to Southern US music just as much as French accordion. It’s a shame we didn’t have something similar to Blues and Country here when all the men used to work in the mine… or even once they all got laid off”. In 2012, she settled down in Berlin after much roaming and started working with other musicians in town and recently started gigging between Kreuzberg and Neukölln.

When and why did you start playing?

I’ve been writing songs for as far as I can remember but the real playing started seven years ago when I first arrived in Berlin. That’s where I grabbed a guitar for the first time and I haven’t put it down since then, but I traveled a lot and had to come back to Berlin and get back to it all seriously last year after much rambling around.

I met some very cool musicians and really started to develop songs that had been sleeping for too long like The Highway Landscapes for instance, which was written about 5 years ago at least. Now finally the time is right and the place too. Berlin is a perfect place to make music, there’s still so much freedom and energy here. It feels right to play in a bar here probably more than anywhere else.

As for the why part of the question, it’s a tough one, I write what comes to my mind, and if I believe the song is good enough, I’ll go and share it hoping people will enjoy and maybe relate to it. That’s the point of it all, giving something back, because I received so much from so many musicians.

Who or what are your influences?

Since I mostly write stories above all, my biggest influences are the people around me. The ones in the bars calling me names or looking for trouble of any kind or just sitting there looking bored and blue. Real people from my hometown and all their crazy anecdotes also, that’s my fuel. My own story too, obviously, we can’t help that.

Musically speaking I can name a few guys that taught me a lot but I’ll regret the ones I forgot in a minute, I guess I have to admit some obsession for Townes Van Zandt, Lucinda Williams, Tom Waits, Sandy Dillon, Eels… I also spend long hours with old guys like Waylon Jennings or Merle Haggard. They knew how to tell a good drinkin’ story.

What are you currently working on?

I’m recording some new tracks written over the past few months, it’s been a very productive and inspiring year. I owe it to the city for sure. I’m hoping to share these new tracks by February/March.  Four of them are on the way and will all be very different from each other. If I don’t get bored with a song after sitting on it for months and playing it for hours, then it’s good enough to share.

Also planning some gigs in Berlin and around starting next month and that’s the best part… to actually see people stomping their feet while you strum. But I like the recording process very much too and I’m blessed to be working with an awesome musician who helps me with the arrangements and production side of things, giving shapes and colors to the drafts is a beautiful feeling, it’s like putting flesh on a skeleton.

How do you go about writing songs?

It varies from track to track. It’s usually some kind of flash, a word spoken by someone, a situation. One stupid joke can give birth to an entire song, a glance in the looking glass. But when I look at the finished lyrics, I always realise that there are many more things there that surely marinated somewhere in my brain for much longer. Wine and liquor are also usually involved. Then of course the melody has to carry it all and take over. The rest comes way after.

How did you get into the Antifolk music?

It’s a world of stories where most musicians still write about something and go beyond the Baby-I-Miss-You-Bullshit. I could never care about the whole mainstream charts thing, I’ve worked in the industry and just like the dealers selling crack, I know how the shit is made so I don’t use it. So that leaves us the electronica-hipsters, well, how about dropping the sunglasses and making a point?

I don’t care much about the label, the genre and the packaging, for me it’s good or bad, it’s got guts or not.

What is the scene like in Berlin? Are there many antifolk artists or nights?

There are so many musicians in this town but at this point, I’d say the scene is not clearly established. There are some bars and venues that host antifolk, altcountry and acoustic stuff but Berlin has such a (well-deserved) reputation for everything electro that it’s still hard to convince someone to go down to some jam session.

But there are more and more open mics and bars focusing on actual musicians, there’s still a lot to be done but the will is there and the musicians are just spreading like mushrooms, let’s see if it really gets as huge as it could. The next couple of years will tell.

Have you toured outside of Germany? Any plans to?

First we take Berlin. Then… Oh I’m bad at making plans but yes I surely hope so. Yeah actually I’m sure I will…UK, Netherlands, France, there are so many places in Europe where alt-country, antifolk and good old storytelling is still loved and alive. I’ll drive.