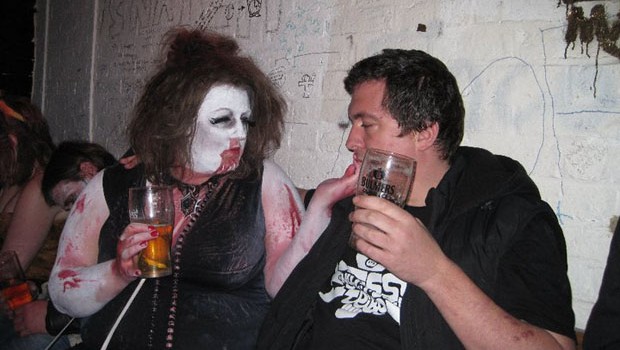 Hi everyone, Jack here. When I first arrived at the 12 bar on Saturday my first thoughts were “Oh God not this place again”, but after a few beers things started to get pretty good…

I had a look for the part time punk who works there but he wasn’t about so that meant I could bring my own beers in. Party Time!!!!!!

The Bobby McGees were on first but I don’t really know what to say about them because there not really my kind of thing but people seemed to like them so what the hell.

I don’t really know why I’m bothering to right this to be honest because I cant really remember a lot of the night.

Next thing I knew Captain Pedro was on the stage in probably one of the best performances I’ve ever seen him play. He said he might not play “Rock and Roll Points” but I was glad he did because that song fucking rules.

At one point the lights went down and these 2 MC dudes were on stage rapping to a song that I cant spell, they were amazing. (u should record with them Pedro).

A few Beers later and things started really hotting up with the genius that is JJ Crash featuring the Lips. What can I say about this guys set? Not a lot to be honest because I cant really remember it but I do remember having a great time jumping around to “Running out of beer”. I’ve seen seen this guy play loads and he’s always good so I’m sure he was on Saturday.

Scrappy Hood was on next with A powerful solo set. For me he was a major highlight of the evening, some of his songs were very emotional, I even saw Jimmy Blade cry at one point. The only other time I saw this guy crying was when he did too much acid and ketamine and thought he was dead.

Sorry but I cant remember anything else past this point, the next thing I know I was hanging out with this homeless guy outside Waterloo station who stole my monthly travelcard but I got him back by telling about karma.

Somehow I also ended up with the transport police in a room underneath Vauxhall tube, but they let me go when I told them I was friends of the Scottish bird from “Rail Cops” the TV show.

All in all this was a great night, roll on Summer fest

Sorry about the bands I didn’t mention but your all fuckin great,

PS If anyone from the NME is reading this and wants to offer me a job my email is jackyourbody@hotmail.com