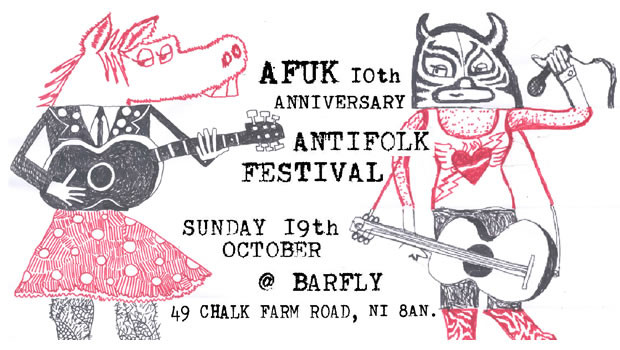 On Sunday August 1st 2004, in the cellar-like venue of the Buffalo Bar in London, the first ever event dedicated to showcasing home-grown British antifolk artists took place. I was lucky enough to be an organiser and performer at this first event, but didn’t expect things to still be going 10 years on.

From this first gig grew the Antifolk UK scene, providing a community for the less conventional urban/punk/dark/losing it/outsider/addicted/half-welsh/mentally-challenged/whatever folk artists as well as leading to regular events and festivals being held across the country. In addition to the ongoing Festivals held in London, the Antifolk UK scene spread, leading to events and festivals in Brighton, Bristol, Cardiff, Liverpool, Oxford and Sheffield amongst others.

To celebrate the 10th Anniversary of the birth of the Antifolk UK movement, we are putting on a day long festival showcasing many of the acts involved in the scene at the Camden Barfly on Sunday, October 19th. Some of the original line up from the first event feature: David Cronenberg’s Wife, myself (Filthy Pedro), JJ Crash, Milk Kan, Sergeant Buzfuz & Spinmaster Plantpot.

Doors are at 13:00 and the music kicks off at 13:30. Acoustic-ish sets in the downstairs bar all afternoon, followed by music on the upstairs stage in the evening.

Downstairs in the bar: