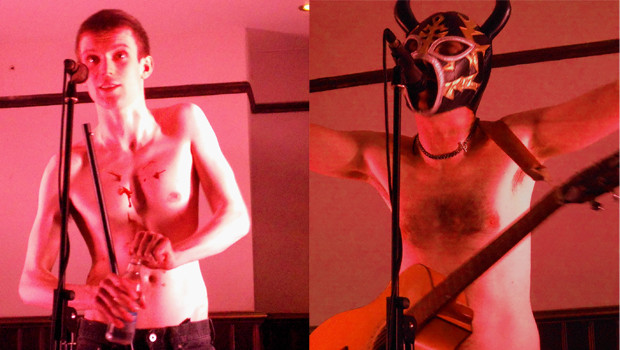 It’s always the same. I take a night off doing music reviews to watch some live music which I know I’ll end up reviewing anyway, for posterity. Or something.

After a fortnight of chronic insomnia, I’m feeling particularly crotchety and wired and anti-everything, so figured an evening of antifolk could be just the ticket. Especially as, in an anticapitalist spirit, entry was free. Free? Yes, really.

Bored Housewife, a foursome built around Belfast duo Justin McKeown and Meabh McDonnell, are first up. Touting their recent ‘Bin Hoaker Chronicles’ release, they’re as sweary as fuck and guaranteed to provoke laughter. It’s all in the delivery: the incongruous juxtaposition of breezy acoustic folk tunes and lyrics that are scathing, bitter, cynical, and plain perverse.

It’s a good job they are astutely observed and so damn funny, or their songs about soured relationships, shit jobs, vegetating in front of the TV, celebrity culture and watching your life drift by in suburban mediocrity would be absolute wrist slitters.

Mark Wynn is a rock god. I’ve known this for years, as has he, but it’s only recently that the world has come to this realisation, with the NME declaring him one of the ‘50 Brand New Artists Set To Storm 2015’. Ha!

Mark isn’t the kind of artist who’s content to coast, and his act is constantly evolving. Tonight, his set makes much of his emerging from early retirement from the music industry in favour of a more lucrative career as a cleaner due to popular demand and that NME article.

As he throws Iggy poses, struts and gurns and leads us on countless bizarre tangents over a cranked-up backing track, he once again proves himself to be a truly unique talent. It’s a any, madcap style, as much performance art as musical.

As he’s carried, shirtless, around the pub, smearing himself in brown sauce, it’s hard not to appreciate that the man is a legend in the making. In my excitement, I managed to spill my pint but Mark, ever considerate (and ever the consummate professional / cleaner), mopped the floor at the end of his set.

In Antifolk circles at least, the UK movement’s founder, Filthy Pedro, is already a legend. It’s not hard to understand why: armed with an arsenal of decent tunes, he’s simultaneously unassuming and irreverent. By which I mean, he has a unique style that’s charming, unpretentious and entertaining.

Moving between straight acoustic narrative-based songs, like ‘They Kicked Me Out of Anglesey’ and quirky rockier tunes like ‘Rock ‘n’ Roll Points’, augmented with drum machine and additional programmed backing, Pedro (performing tonight without backing band the Carthaginians) draws on a broad range of cultural and historical references to provoke both thought and mirth.

Whipping his shirt off and donning his mask he launches into ‘Gilgamesh’, a genuine rock beast.

It’s certainly not your standard folksy, singer-songwriter fare with musings about relationships, feelings, and the occasional protest song. No, this is something else altogether, by turns cerebral and silly.

It all adds up to a cracking night and I’d challenge anyone to find an event that’s more fun for free on a Friday night.