A Sidewalk Cafe history in pictures

The Sidewalk Cafe in New York holds a key place in the history of Antifolk. When Lach moved camp to 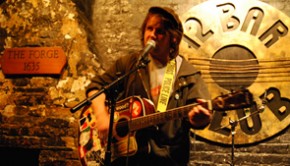