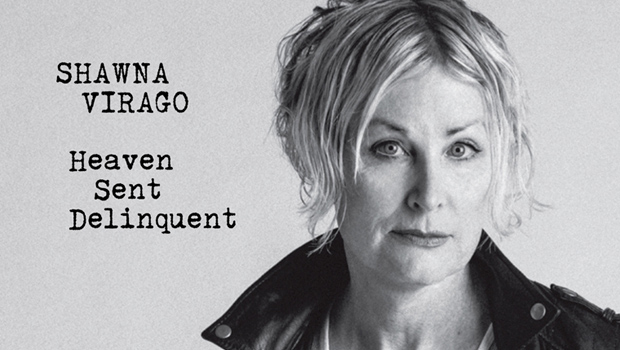 I first saw Shawna Virago perform several years ago and from the moment she got onstage and plugged her acoustic guitar into her amp, the audience was captivated, swept along on her journey of antifolk and punk. Virago’s adept song writing and talent as a lyricist stood out that night, and it was a performance the audience did not want to end.

Now years later, Virago returns with a new album Heaven Sent Delinquent and reaffirms the promise of that performance. Ten new storytelling songs from the trailblazing transgender wordsmith make up this sparse album – with a punk attitude combined with a tiny bit of twang that reminds me of a cross between the acoustic songs of John Doe and anthems of The Gun Club.

The songs on Heaven Sent Delinquent are well-considered, but manage to maintain a rough-hewn quality. The album is about punching back against a hostile world, each song focusing on the plight of a queer loner and their journey. The album’s first single ‘Gender Armageddon’ is a tribute to the desperate camaraderie of queer and trans outsiders reaching to escape stifling circumstances. The title track, ‘Heaven Sent Delinquent’ is an ode to a full tank of gas and trying to reach a place you might never get to.

Choosing a favorite song is tough with the high quality of Virago’s songwriting, but the song that has stuck with me most is ‘Burnout,’ an epic tale of a first queer sexual encounter.

The album’s production is unadorned with simple arrangements – allowing Virago’s poetic lyricism and unique guitar style to shine. Virago’s voice sounds solid with a slight edge, and her guitar playing is purposely tough but restrained. With Heaven Sent Delinquent Shawna Virago has created a strong and fully realized collection of songs that echo long after the album has finished playing.

Heaven Sent Delinquent (Tranimal Records) is now available on vinyl, CD and streaming. Get the album and singles on CD Baby or at www.shawnavirago.com.

Alex Burns Alex Burns is a man of the people and loves all kinds of rebel music, especially made by his friends.