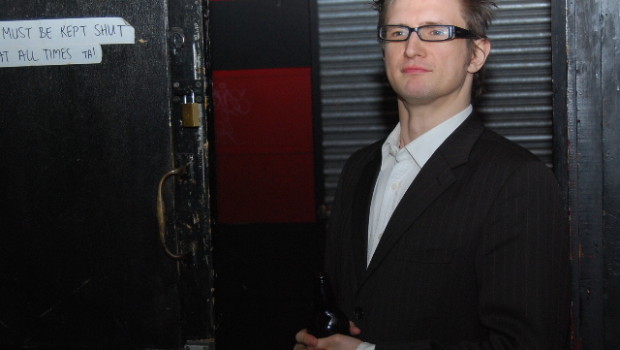 Longtime antifolk fan Dedee W caught up with Tom Mayne, the songwriter behind David Cronenberg’s Wife and Filthy Pedro’s partner in running the antifolk shows in the UK, to get his perspective of the last ten years…

Dedee W: You’re known as one of the founders of the Antifolk scene in London, along with Filthy Pedro. How did you first meet and get things started?

Tom: According to Filthy, it was at The Spice of Life open mic. There was a sign-up list – put your name by a number. Everyone avoided the first spot. So naturally I chose that one – to get it over with. I think it was Pedro’s first time there, so when he saw me he was thinking ‘this is interesting!’ though actually a lot of the acts at that particular open mic were quite ‘mainstream’. Vis the Spoon’s open mics were and still are a little more chaotic and interesting.

I don’t think I spoke to Pedro that night, I don’t remember, but later at a show at the 12 Bar he introduced himself to me and said he was thinking about starting up antifolk shows in the UK. He asked if I’d help – I was like, why not? At least it would give us a place to play.

Dedee W:  Had you heard of Antifolk before then?

Tom: Yes. I think my friend George had sent me an MP3 of Jeff Lewis’ “The Chelsea Hotel Oral Sex Song”. I loved the fact that Jeff had just recorded it on a tape deck – no overdubs – “here’s the song”. Like with punk in the 70s it made me think that I can do this. I’d been writing songs before that, but this made me start trying to get gigs. I gave a CD to Joe “Sgt Buzfuz” Murphy and he gave me my first band gig. By then, I’d done a bit of searching on the internet and read up about antifolk and the Sidewalk and liked the idea of it – the sense of community.

Dedee W: As Antifolk is more of a scene than a genre, would you say the DIY ethic was something a lot of the artists had in common? I often describe it as songs that tell stories, a bit outside of the mainstream.

Tom: It doesn’t have to be lo-fi of course. It shouldn’t be wilful. If you’ve got a good microphone use it! But what kit you have, or what guitar, or how good your voice is shouldn’t be an impediment. That’s one aspect. And I think that’s related to what you say – songs that have something to say.

I mean, you always are playing a bit of a character when you write songs, but when you listen to Jeff Lewis’ songs, for example, you have a real feeling for his personality, his fears, likes, dislikes and so on. I think that’s part of it too. But it’s hard to put a handle on it – for it to mean just one thing – and that’s what’s good about it. I mean Extradition Order don’t really write the kind of song that Jeff does, but they definitely have the DIY ethic.

Dedee W: Yeah, that’s true. I always enjoyed the wide range of acts I got to see at AFUK gigs. I have fond memories of the marathon gigs that were the Antifolk festivals. 7 til 3am two nights in a row! Those were the days. Is 12 Bar still Antifolk’s spiritual home?

Tom: I guess so. Andy Lowe [12 Bar promoter] has been so good to us – sticking up for us even though I think a few people think we’re just a bunch of weirdos. 12 Bar always seems to be in a bit of a precarious position with the Crossrail project moving in, but there are no plans to close it at the moment, so why not, if they’ll still have us?

But antifolk’s not confined to one venue – we’ve done shows at the Buffalo Bar, 100 Club – and, like this month’s 10 year all-dayer show – the Barfly in Camden.

Dedee W: Do you guys still do shows at Buffalo Bar sometimes? That’s where your first Antifolk shows were, right?

Tom: The first couple were there. I remember the first one well – Doug [Black] – The Purple Organ – was last on, it was late on a Sunday, people were sitting down on the floor, and he just played this amazing set. It was special.

We don’t do any shows there anymore, but it’s still a top venue. The Guided Missile Special People Club is a night with a similar ethos to the antifolk nights – unusual bands, maybe with a bit of a harder edge. 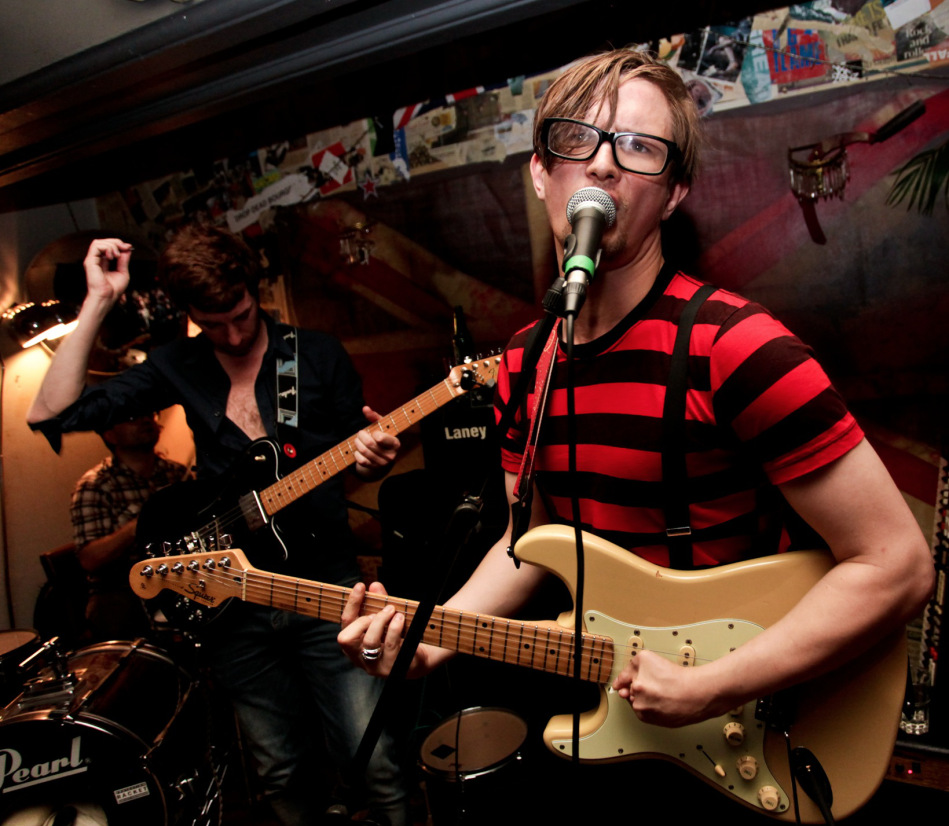 Dedee W: What made you decide on a daytime gig in Camden for the 10th anniversary?

Tom: We have our regular night at the 12 Bar coming up in November and wanted to do something a little different. We wanted to have as many acts as possible on, and it kind of works best on a Sunday with people coming in and out during the day. If you do that on a Saturday people may not want to come out until the evening.

Dedee W: What are some of your favourite highlights of AFUK festivals and shows in years past?

Tom: Man… Some of those mid-period Milk Kan gigs where the whole of the 12 Bar was so rammed… playing keyboards for Paul Hawkins and challenging the audience to hit me in the face with one of Paul’s cuddly toys… And other random moments, like when a brass band started playing impromptu in the side room at 2.30am after the music had finished in the main room. They played til the venue closed. Or when another brass band joined Planet Zim, the ukulele player – again it just happened without any planning. I also met my girlfriend at an antifolk fest! And then playing at the New York antifolk fest, of course, was a highlight.

Dedee W: Tell me about it.

Tom: I thought it was just going to be me but then Stu [DCW drummer] decided to come along, Tom [Alder, DCW violin payer] came with his girlfriend at the time and Pog [Pandora Colin, bass player] too. Everyone was so accommodating – it felt like a real community. I stayed with Thomas Truax, Curtis Eller, and Beau Johnson – who had never met us and just left the keys for us with the porter because Lach had put in a good word for us. Stu and I also stayed with Doug [The Purple Organ]. That was an experience. He’s such a great guy, and funny too. I remember he ordered over the phone 23 bottles of Snapple, and a ham and cheese sandwich. He’s addicted to Snapple – he has a song about it. I was like “Why order the sandwich?” “So it doesn’t look weird,” he said. He didn’t even eat it in the end.

Dedee W: What are some of your best random discoveries from curating all those line-ups? I still enjoy the odd Cookie Cutterr track that I have on my ipod.

Tom: It was great to see people develop – Paul Hawkins and Alastair from Extradition Order as they went from solo to forming their bands. When Ian [Button] recorded Extradition Order’s first tracks I was just blown away. And when Nathaniel Kidd started writing more of his own songs. And then some of the solo acts – Malcolm Kaksois, for instance – just great songs, great sets.

Dedee W: What are your proudest achievements, having made it to 10 years of Antifolk?

Tom: Just giving people who deserved it a chance to play, as others did for me. For example I first saw Tim Tomlinson singing an old folk song a cappella in an awful open mic in Angel. Some people weren’t taking him seriously, others were just talking over him. But I liked it and liked the fact he’d just got up there. So I started talking to him and asked him to the 12 Bar open mic, and introduced him to a few people. He ended up joining Filthy Pedro’s band and becoming a part of the community.

Tom: You can’t really put a label on him. I remember when he was banned from the 12 Bar for a few years so he started up “The Anti-Antifolk Fest”. We played there once – it was brilliant, total chaos. It was during the 2012 Olympics and he’d billed it as an official Olympic-sponsored event…

Dedee: Let’s talk a little about your band David Cronenberg’s Wife. You’re sometimes compared to The Fall so you must have been thrilled to support them in December 2012. How did that happen?

Tom: Mark E. Smith was supposed to book the support acts for a gig at The Assembly Hall, but he didn’t – either as a bit of a Mark E. joke, or he just forgot. Some friends of ours, Flipron, were asked to support, but they live in Glastonbury and couldn’t make it at short notice – this was mid-afternoon on the day of the gig. Jesse, the lead singer, kindly recommended us. A few of my band just couldn’t make it, but there was no way I was passing this up. The good thing about the antifolk community is that you all know each other and know each other’s songs. So Ian [Button] moved to drums and Jes and Niall from Paul Hawkins’ band stepped in. The two things I remember most about the gig are Mark E.’s roadie manoeuvring two quite elaborate sofa chairs at the back of the stage so Mark could have a bit of a sit down when he needed to, and Tom, our violinist, singing songs in Greek to Elena Smith backstage. Elena’s Greek and Tom speaks Greek so I dared him. Tom doesn’t need much daring…

Dedee: Your third album deals with controversial themes. What kind of reaction did it get?

Tom: People in antifolk already knew the songs and know me and understood it, I think. It came out at a rather apt time, with all the scandals at the BBC [former DJs found to have been involved in sexual abuse and harassment] so it provided a modicum of debate. The BBC, perhaps understandably, didn’t play anything from it at all, even the safer songs.

Dedee: And what’s next for DCW?

Tom: We have two new songs coming out on a compilation from the Fat White Family’s first label, Trashmouth Records, which I’m very excited about. Two gigs in October, the compilation launch on October 15 and the 10 Year show on October 19. You just keep on going, try to come up with good ideas, and try not to think about the fact it is 2014 already.