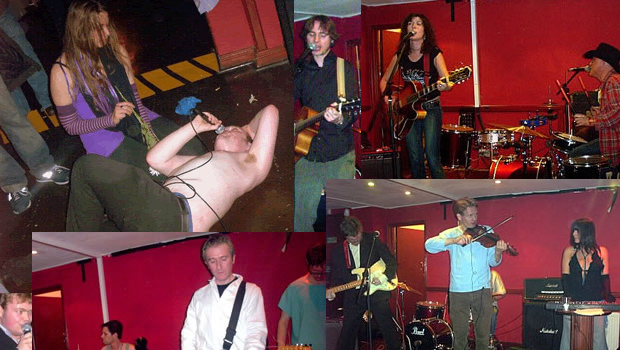 “Has anyone here been to Anglesey?” Filthy asks the crowd gathered at Barden’s.

Just the usual friendly small talk to start off a polite mid-week shindig. It will, inevitably, end up descending into the sweaty noisy bedlam of Thee Awkward Silences’ set. But we’ll get to that later.

The Dalston Antifolk Special, was given this highly original name based on the fact that we are in Dalston’s finest (and only?) venue, Barden’s Boudoir. It’s easily spotted on the street by the large unsubtle orange letters spelling out the word ‘Bardens’. It’s nicer inside, apart from the state of the ladies loos – no seats, doors that don’t shut, and a leaky pipe spreading a puddle across the floor. But if these help set the scene for my first Afuk review then they’re perfect for our purposes…

There’s a modest sized crowd in attendance, the majority of them belong to, or know someone in this ‘secret scene’, even since having more light shed on it in the recent Time Out article. It’s a shame there aren’t more people here really. But I admit I do kinda like it that way sometimes. Tonight is like a sort of private party. Visitors welcome, enter if you dare.

To begin, we have the affable Filthy Pedro, singing his delightful tales of history and debauchery, delivered with the slightly shambolic witty charm that I’ve come to associate with these evenings. He starts with ‘What Goes Up’, a favourite of mine, despite the fact that I’ve never had to survive a hangover like the one they’re singing about. Stu from DCW is his drummer tonight, and Thee Intolerable Kidd joins him onstage for some backing vocals, including noises that are “something like the Bee Gees” (as the song says). Filthy takes requests for what the last song should be, and it’s a narrow win by ‘Gilgamesh’ over his famed theme tune ‘Rock n Roll’ points.

On that slightly darker note, we’re about ready for David Cronenberg’s Wife. They’re one of those bands that always deliver. And also, one of those bands that has a few changes in the line up now and then, but we’ll never stop watching them just so long as they sound as good as this. Their music has been described as ‘Fall-like brilliance’ and though I haven’t actually heard a lot of The Fall, this makes me think I’d like them. They hit us straight away with “I Couldn’t Get Off”, which probably has one of the best opening lines I’ve heard. Tom Mayne’s sharp narrative style of delivery makes it a strong combination of great stories, great songs, and great showmanship – from their oddly beautiful tribute to the ‘Anorexic Girl’ to the stonking bluesy ‘I’m on the Booze Mama’. The latest addition to DCW tonight seems to be a main focus for some people in the room. I’m referring to the lovely Rhi on keyboards. Like Natasha Shneider in Queens of the Stone Age, she certainly does no harm to the band’s image. Sure, there are fewer notes to play in this case, but that’s beside the point. The top she’s wearing is a nice metaphor for the band. Dark, stylish, and just revealing enough to be thought provoking. I like her matching long black gloves on too. Kidd jumps on stage again for the last song and the picture is complete.
It’s all about collaboration tonight. And if you’ve been keeping up with the news, it’s true; Afuk is ‘so hot right now’. As in “hottest underground subculture.” (Time Out) And yes, I’d have to agree, you are a rather good looking, not to mention talented bunch.

The sound tonight’s been a bit too loud since the second band, and it’s all getting bit hard on the ears. I’m told the soundman’s having a bad day or something, but it is a bit shit to take out your bad mood on a room full of people by leaving the sound to be as loud and crap as possible. I’m a hardened gig junky though, and it hasn’t spoiled my night so far.

So on we go. Lil’ Lost Lou and the Lost Cowgirls (who are actually boys) are next.  She announces that she has nothing to do with the Antifolk scene, which is true in a way, cos I’d agree they’re more of a straight up fun loud country band. But hey, it’s a ‘scene’ rather than a ‘sound’ as such, and we’re all friends here.

I like Lou, I think she’s got balls. This is purely based on a few times I’ve seen her solo stuff, where she was brazenly ranting about her ex running off with a “stupid American girl”, in a really funny and honest way. Tonight it’s all raw and raucous rockin’ country songs. Foot stompin’ tunes, and the odd harmonica thrown in for good measure.

And finally, the headliners for tonight – Paul Hawkins and Thee Awkward Silences.
What can I say, except you had to be there. For the uninitiated among you, I can only recommend them. This is the Hawk, turned up to 10. If he was thinking about chalking up a few more rock’n’roll points by putting together a kick ass band like this, (Kidd, Tom DCW, and Ian Button) I’d say he’s doing pretty well.

Tonight’s set is one to make your ears bleed and your lungs explode. They sound more solid every time I see them, and it’s a strange mix of unnerving and compelling not knowing what the fuck Paul’s gonna do next. I recently decided I can’t watch this band sober. It’s only their fifth gig tonight, and they’ve been going from strength to strength (for spurious rumours of their impending split, see the Afuk message board). Their stage props this evening include various animal puppets and soft toys, a box of chocolates that Paul offers to the crowd, and the usual array of fresh flowers for the fans.

They begin with a screech of feedback and proceed to lift the roof off the place, Paul screaming ‘A-w-k-w-a-r-d!’ into the mic, proving that not only can he spell, but he can do it loudly, over the noise of a superb bunch of musicians, even when the soundman seems to have turned them up way up past 11. (We were all going slowly deaf, but having a fantastic time).

Songs like ‘Travelling Show’, and ‘Nuclear Plant’, all sound great with a full band. They throw in a cover of ‘Rave On’ as well, and I have a blast screaming along with one of my favourites, the angry drunken anthem ‘Evil Thoughts’. Brilliant. These guys are superstars. Lil’ Lost Lou joins them as guest guitarist as they finish with the monster that is ‘Mother I’m on TV’. It ends with Paul lying on the floor, covered in sweat, chocolate and flower petals. An angelic looking girl kneels beside him, holding flowers. He looks like he’s ready to die happy. I notice Joe Buzfuz, wide eyed, lost for words and pretending to worship him. Pure rock ‘n’ roll behaviour if ever I saw it.

Watch out for these guys, you heard it here first.