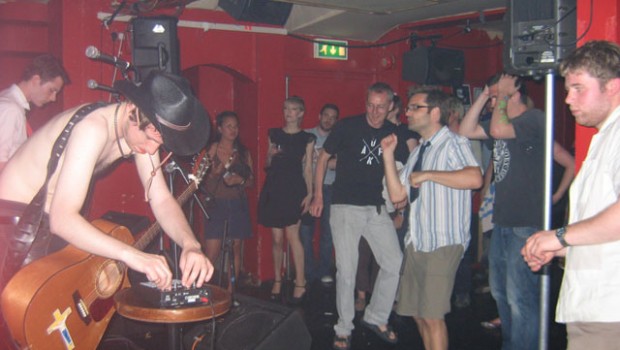 What a weekend! To be honest I am amazed I am able to write this review. After not one but two Antifolk specials at the weekend I must say Im not exactly on top form this evening, but the weekends shenanigans must be recalled. so lets plough on..

After spending Saturday in Brighton for the Antifolk Allstars featuring Stuart James, Look Look (Dancing Boys), Filthy (without his intolerable kid), Scrappy and the Bobby McGees and Larry and Mertle who were all brilliant, we made our way back to Islington to the old home of Antifolk festivals The Buffalo Bar for The (almost) Summer Solstice Special.

It all began with David Cronenberg covering antifolk favourites including Jinx Lennon, JJ Crash and Spinmaster Plantpot. As far as opening acts go this was a fantastic start. Surely it doesnt get much better than thisbut of course it did!

Everyone (or most people) watched in awe while Suzanne Andrade (accompanied by the Kidd in his first out of five appearances tonight) beautifully combined spoken word and film (and a saw) conjuring images of watch with mother, ice cream, thats about as well as I can describe it.

Kid Sister Phoebe does not record on CD, preferring the cassette. He doesnt like to shave and definitely wont be going to another musical his visit to see Cats was not a success (but makes good songs telling you about it). The last time Kid Sister Phoebe played at an antifolk festival I missed his set. Fortunately this time I did not (it would be a bit unlucky/slack if I had missed it two times)

Bigger and better (and not to mention an additional person) Filthy Pedro and The Carthaginians played exceedingly well. If they were cake manufacturers, they would be Mr Kipling. But they are not manufacturers or indeed manufactured, and that is why we love them. Scoring so many Rock and Roll points they are probably off the scale by now, tonight they were amazing.

In the run up to the weekend there had been some speculation over what was going to happen during Paul Hawkins and The Awkward Silences set all dressed up the sound was definitely not awkward and definitely not silent.

As I have already mentioned it was a special night tonight with plenty new act to spoil us, and The Ghosts were no exception.

Alex Ward played (very energetically) a storming set, another newcomer I for one would like to see more of.

With the Dana Immanuel (and Kidd Spotters (that sounds very dodgy, but its not meant to) he played the drums in this set) For those who have yet to hear the soulful beautiful songs of Dana Immanuel hurry up and listen. Its as simple as that. You are missing out. Dont say I didnt warn you..

Making sure the prize for most appearances in one night was definitely his, The Kidd came back to the stage for a fifth time due to popular demand played a few of his own songs which wound the night down brilliantly.