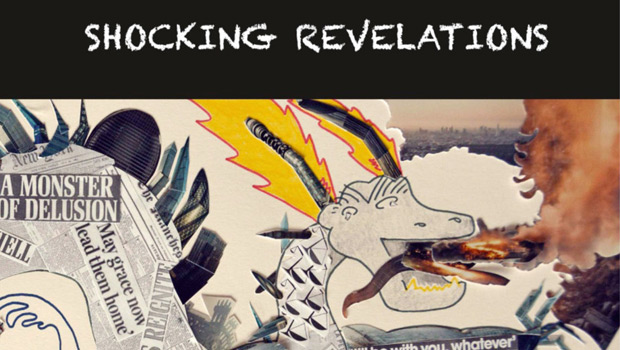 Peel used to say he just wanted to hear something different.  Well there are some echoes here, of Tom Lehrer’s biting humour, Pete Seeger’s political passion and a Patti Smith or a Beefheart vocal but this seems a novel attempt to combine all of that.

Main-man Rhys Davies writes the songs (he borrows the tune of the Welsh National Anthem for a tragi-comedy picture of modern Wales, featuring Brona McVittie on harp, fresh from her album We are the Wildlife set ), sings and plays the guitars, harmonising his own vocals too (though doesn’t own up to playing the recorder).

There’s a full band, with Mark Braby (Vic Goddard and Subway Sec) driving things along on drums and Graham Brierton providing some melodic bass which thumps along on the Husker-Du like “Tender Commendments” (a biblical allusion? Well the album is Revelations).

A hypnotic finger-picked guitar figure, then a force 10 gale metal guitar usher in Burning Bush.  It could be Trump, an apparently natural disaster and a President gibbering nonsense, showing a callous disregard for poor people caught up in it – but it’s George Bush and Hurricane Katrina.

Bush encourages drowning Kyoto, that is the climate accord and the City.  All this delivered in a mock-cowboy imitation (“Burning Bush” as in singeing the President and another biblical allusion?!).

“Together” follows and is a more optimistic song, a touch of banjo by Jack Hayter (fresh from his album Abbey Wood) lifting the mood, taking a swipe at Trump and David Cameron, praising Mairead McGuire (Ireland peave movement) and Malala “the dead and the buried are not beyond doing it”.  A sample of Obama singing in Charleseton with and for the community, is the polar opposite of the preceding song.

“I Will be with You Whatever” is a gorgeous love song complemented by Jonathan Clayton on cello, but it’s about the Bromance between Tony Blair and President Bush.  The people made to suffer because of their actions are also with him, but they are “shadows that top the stairs” and “in the bottom of” a bomb crater.

There are a lot of words here and charged ones at that, but the musical styles change with each song, and you never know what is coming next, whether fuzz-punk or gentle folk.

Brexit of course is the great political topic of our times, and Goode Olde Englande begins with a picked guitar and recorder accompaniment, but it is bitter in its references to WW1 recruitment, digging for victory campaign in WWII (and nostalgia for those times) and feudal power which are brought up to date with “sold us where the money goes, down a river austere” and “put feathers in our caps, gave us zero-hours contracts… task-master olde Englande”.

The flip side is Land of My Daughter, not the bellicose anthem about a powerful nation, but a song about the little people crushed by power still muddling through anyway, beating the world by waving banners (the video makes it clear this is sport not military conquest) and “the harp maker exports to Japan”, a new country emerging from the old.

The Ecstasy of Trees is serious ecological song masquerading as knockabout comedy (“trees sure do take some stick, in Brazilian forests almost annihilated”) and To Bring Some Food to the Table takes a growling, Son House swipe at “mincing Minister Boris”.  It is either out of date or predicting his Prime Ministership.

The sleeve is also by Davies, it is a dragon (of sorts).  If it is a Welsh one, it has lost its wings, but it looks more Chinese and with spines of commercial London towers, it is an angry Capitalist beast, tossing caricatures in its wake.  The dragon breathes flames from Grenfell Tower, another example of profit gone mad, and it has wonky eyes, it does not even see properly what it does (yet another biblical reference?!!?).

The album is accompanied by a youtube channel containing a mixture of footage shot by Davies and slide shows of the political topics, often funny and always engaging.

A poster of the sleeve, download and CD are all available at https://bonesetter.bandcamp. com.