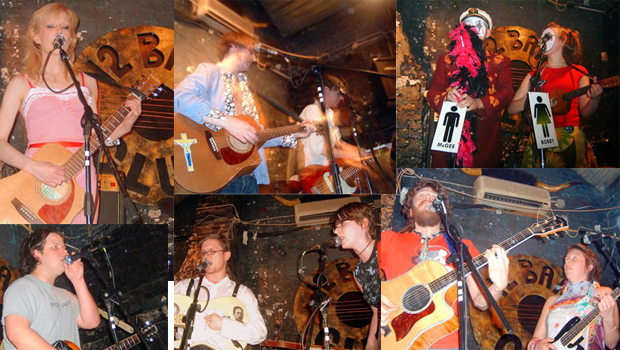 Spring is here, the birds are singing, it gets dark later and the suns blaring…

Well actually no, it was nice the day before though. Today we make our way in the pouring rain to the 12 bar for the spring festival for another night of drinking and debauchery from some of Antifolks finest.

Lucy Joplin kicked off the proceedings and despite trouble trying to get to grips with Filthys guitar was a brilliant start to the night with her beautiful voice (and dress!).

Every time I see Kevin Two Sheds I like him that little bit more. Especially the song “Eat Your Greens” which always makes me chuckle. Tonight he has assistance from a xylophone player and a bass player (I am not sure if they are recent additions but I know they should stick around as it made Kevins even better) .

The last time I saw I saw a band with sailor hats and feather boas I was watching Norwegian Metal band Turbonegro at Reading Festival, obviously The Bobby McGee’s are a different kettle of fish entirely. With painted faces and costumes they entertained the (very crowded) 12 Bar. The soft beautiful voice of Eleanor and Jimmys strong Scottish accent go so well together. If you haven’t checked them out yet, do.

The Autumn Festival saw Eccentric Tom DCW#2 getting naked during their set, so there was speculation over what was going to follow THAT performance. This time however there was no nakedness (and no Tom) but there were too new additions and new material from David Cronenberg’s Wife.

I think I may have said this before, but if you were to choose an act that were typically the 12 Bar then it would be JJ Crash and The Lips with there Bluesy, Punk songs it is always a joy to see them take to the stage.

Another act who took to the stage without the other members of his band was Scrappy Hood of Milk Kan. Scrappy had a few visitors on stage, Chris (The Lips) and Medders made an appearance so he was’nt too lonely up there. It was funny listening to everyone cheer for their area during Finding My Way Home the song for everyone.

Filthy Pedro and Thee Intolerable Kids live shows keep getting more spectacular. At a recent Blang gig we saw the pair fall to the floor and separate the crowd in a guitar fight this time round the 12 Bar was plunged into darkness during Gilgamesh and joined onstage by a rap duo Prophit and um, the other one (No offence but I have forgotten your name) the effect was amazing.

Now I know I am not the loudest of people and that is why generally as a rule I don’t heckle but tonight I thought I would give it a go, needless to say it did’nt work. I was trying to shout Valerie Singleton, a song from The Big Fibbers which is actually a true story. Next time I’ll have to shout louder. I am not lying when I say that I enjoyed this band.

After hearing great stuff about the next band I was pleased to have a little dance about to Look Look (Dancing Boys) a shouty electro sort of set up that I have fallen in love with (and so have a few others judging by the response).

It is always nice to hear different Antifolk NY artists and Breadfoot is no exception joined on stage by Spinmaster Plantpot he played an excellent set.

Also over from the states at the moment is Dibs. Another great set (I saw him on May Day). My favourite song was Kite Strings (which is on the free CD if you got one).

Thirteen down and one more to go Thee Intolerable Kid returned to the stage for a solo set to entertain those who were still standing before they wandered off to continue partying (and from what I hear, this was the more favourable option) or to their beds. Another great set from The Kid

So that was that. A brilliant night was had by all. We were warned it was going to get messy and it did and we’ll do it all again when we return to the Buffalo Bar for the June Summer Soltice Special (Sunday June 11th). I can’t wait!