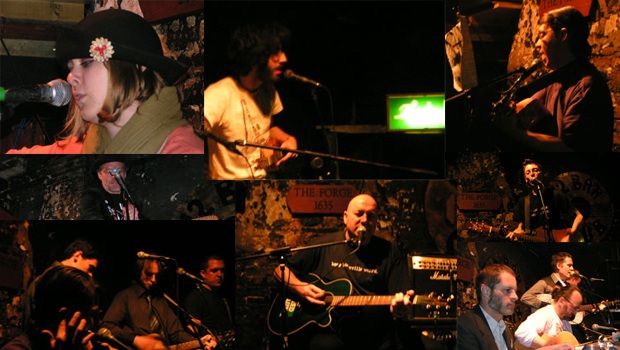 ‘From the outside looking in’

So it’s my first proper anti-folk/fest type gig and I’m very excited. I’m a stranger to the anti-folk scene and on arrival at the venue I’m maybe feeling a wee bit out of place in my insecure, paranoid-fantasy type of way. Not that I’m a complete novice in the gig related world; I’ve been fairly prolific in my gig-going over the past couple of years (after an introspective early life in Wild Wales). So yes, I’ve travelled far and wide in my quest for my middle-age kicks, but this is something totally new, having only been alerted to the existence of the anti-folk scene relatively recently.

On first glance the venue takes me unawares; I’ve been to Bradley’s Spanish Bar and the Camden Barfly, and various other temples of sin and inequity, not to mention the Reading Festival, so I’m used to getting down and dirty in a gig and drinking den-type way, but nothing in my previous career really prepared me for the Blair Witch meets Twin Peaks type ambiance of the 12 Bar. In fact on first entrance to the downstairs pit area I don’t know whether to strap a guitar on, call 999, or howl at the moon like a demented tourist that’s got seriously lost. However, the anti-folk folk seem like a friendly lot and I’m as happy enough after a couple of pints of Strongbow and the first couple of sets.

First up was Poppy a torch-song kinda girl in the Joan Baez/Tracy Chapman tradition- except her subject matter tends more towards the chocolate biscuit and pizza end of things than the ‘overturn the establishment’ rants of her forbearers. Anyway I liked her tales of purple wigs and superhero girlfriends and I particularly liked her winsome sailor hat. She had a big future I’m predicting. Her voice is strong and her delivery is unfussy and direct, which is just how I like my singer/songwriters to be.

Second band up and Miss Sills are very traditional in a Snow White/Vashti Bunyon type of way. During their set I kept thinking about the 1980s flake advert and frolicking in fields full of daisies, romantic aspirations, four-poster beds, that sort of thing. Having said that I’ve always liked bands with lots of percussion instruments at their disposal and they were very proficient at what they do. I particularly like the blue plastic glockenspiel which reminded me of primary school music classes sitting cross-legged in the assembly room shaking a tambourine.

Third up and the above mentioned singer songwriter and multi-instrumentalist seemed to be one of the most popular acts on the bill tonight with words of encouragement propelled like bullets at the stage during the course of the proceedings. And you can understand why when you listen to the stream of musical virtuosity emanating from behind the protective sheath of the artist’s music stand. His use of cultural referencing was wide-ranging and articulate and I kept thinking of the great American songwriter Daniel Johnston who has a similar style and mode of delivery (not to mention talent).

Looking back on this set a week or so after the event all I could find to reflect my experience were the words ‘sleepy, sleepy’ in my notebook. That is to say all I can remember is the overall effect rather than individual melodies or occurrences. I’ve probably hideously underestimated their capabilities and attractions for which I apologise profusely, but then I was recovering from the previous set’s frenetic pace at the time. As a gauche newcomer, my stamina is probably not quite what it could be.

Well I’ve seen Filthy and Co twice now and I have to say they’re growing on me exponentially. What I’m beginning to perceive to be one of the defining properties of the anti-folk scene, humorous self-deprecation, is much in evidence throughout the set and I almost feel compelled to partake of the opportunities for audience participation: particularly during the rousing ‘I’m too good for you’. Everyone seems to enjoy themselves during the set, even if the stage is rather overcrowded for the assembled collective and Penny, extremely glamorous chanteuse from the English National Opera, nearly knocks herself out as she attempts to clamber on to the stage (it really doesn’t pay to be above average height at this venue). I’m also impressed with the biblical pedantry on display- the rhyming of Neolithic and prolific in ‘Man of Old’ particularly caught my ear, as did the sampling of the Suzanne Vega track ‘Tom’s Diner’, which was one of my favourites in the late 80s.

I’m not sure what to say about the Bobby McGees except that there the oddest-looking band I’ve seen in ages- kind of a bit like a Scots Captain Nemo meeting the wandering minstrel circa 1968. Tonight is proving to be a bit of a Trojan horse musically- just when you think you’ve got it all pegged, something else jumps out of the box and takes you by surprise. But actually the BM’s are extremely entertaining and the hippy chick/nautical theme is brilliantly counterbalanced by the nihilistic content of some of the songs- I’m thinking here of ‘Got no friends’ and of course the anthemic ‘Kill yourself’ (not ones for understatement this crowd). Overall it’s a brilliant cocktail of the sublime and the ridiculous wrapped up in one. Absolutely hilarious.

And so to (my) last band of the evening (sorry I had to go catch the last train, which I missed anyway). Being of a naturally curious psychological disposition I was looking forward to this band from the moment I saw there name on the schedule. Or at least intrigued; that’s probably a better description. I’ve heard of the film director David Cronenberg of course (The Fly, Naked Lunch), but where does the wife come in? Anyway, what I got was not dancing typewriters or men dressed as giant human bugs, but gyrating anti-folk folks forming a mini mosh pit. Actually I’m feeling a bit more at home here- I was at a Rakes gig at Kings College a few weeks back and there was a very similar reaction to ’22 Grand Job’ as there is to ‘Couldn’t get off’ tonight. Seems like this anti-folk crowd aren’t that dissimilar to their art-rock indie relatives after all.