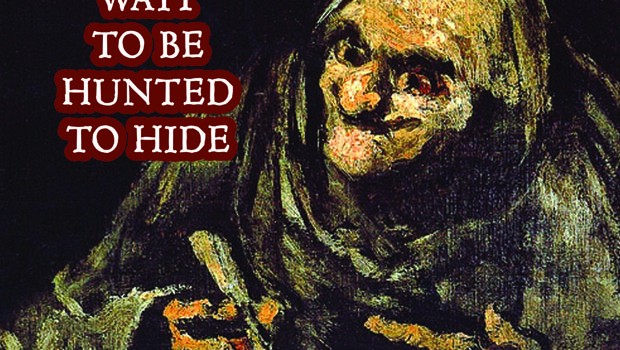 The Press Release is below:

“David Cronenberg’s Wife are set to return with their most controversial and compelling album to date. Emerging from London’s anti-folk scene, they released their debut ‘Bluebeard’s Rooms’ in 2008 followed by Hypnagogues in 2009. Both albums showed a band unafraid of exploring the dark side – both musically and lyrically – gaining them respect and critical acclaim, with Time Out aptly declaring of their debut: “If Nick Cave isn’t unpleasant enough for you, this is an album to treasure”.

Their forthcoming third album, ‘Don’t Wait to Hunted to Hide’, will challenge even their biggest fans confronting head-on as it does the subject of (often male) evil and warped sexuality. The songs take the structure of sneering, sardonic and sinister monologues. Made even more claustrophobic by the stalkerish bass underpinning most tracks and the building, ominous wall-of-sound twanged guitars, present on the album’s opener “Pain Ahead”. Or more perplexingly by tracks such as “The Man at the Back of the Woods” with its superficial pop mudded by an undercurrent of creeping darkness.

In its wide open exploration of the nature of evil ‘Don’t Wait to be Hunted to Hide’ may lyrically shock some, but music, like all art, should challenge and push boundaries. “The new album is very dark but that’s always been part of David Cronenberg’s Wife. The themes in the album present problems and they are hard to listen to but I’ve always liked that kind of art that takes a difficult issue and tries to explore it. I would hope that people listening to the album would see that this is not condoning these actions, but I don’t think anything should be off-limits when it comes to creative work.” – Tom Mayne, David Cronenberg’s Wife.

‘Don’t Wait to be Haunted to Hide’ is a brave, challenging and engaging album. A musical Brother’s Grimm for the modern age.”

You can buy the album in shops and online here:

Direct from the record label, both the physical CD and MP3, at Blang Records.

Video of the The Pied Piper Of Maidenhead: