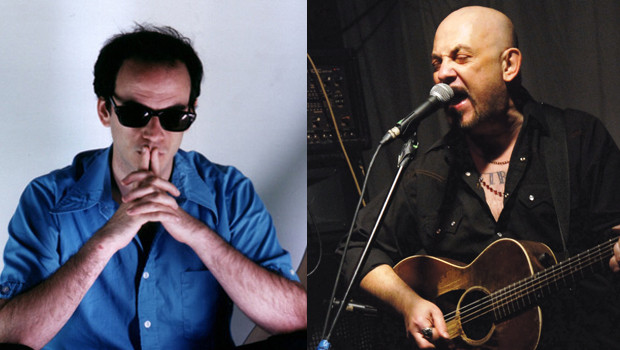 Saturday Jan.19 will feature a guerrilla Antifolk party at an undisclosed location featuring Lach and Surprise guests.
Follow Lach on Tweeter @lachtoday for pop-up announcements a few hours before the show.

Ed Hamell picked up the guitar at age 7 and started writing songs not long after. In his early 20s,he fronted a local band in Syracuse, but local bands were a dime a dozen in the tough, working class neighborhoods of upstate New York. Which is how the one-man act known as Hamell on Trial was born. He toured the US armed with his battered 1937 Gibson guitar before settling in Austin, Texas, where his songcraft and storyteling found a receptive audience.

After seeing him at the 1995 SXSW Music Conference, Mercury Records signed him on the spot and released two albums before disaster struck in May 2000 when Ed was seriously injured in a car accident. Recovering from head and spinal injuries he released the album Ed’s Not Dead: Hamell Comes Alive the next year, followed by the landmark album Choochtown that remains a huge favourite with fans to this day.

In 2003 Ed signed to Ani Di Franco’s Righteous Babe Records, releasing the album Tough Love, followed by Songs for Parents Who Enjoy Drugs in 2006. The next year his stand-up show The Terrorism of Everyday Life won 5 star reviews at the Edinburgh Fringe plus a Herald Angel Award for an outstanding performance at the festival.

Before, during and after 2010 Ed Hamell took on the challenge of writing a new song every day and publishing the results on his Youtube Channel. He ended up with over 400 tunes, eight of which were selected for his new digital EP Ed Hamell Is The Happiest Man Alive (click for preview)…

This 8-track mini album is produced by The Butcher Bros and features collaborations with Kimya Dawson from Moldy Peaches and longstanding friend and mentor Ani Di Franco. It will be released on January 14th, 2013 by New West Records – home to Richard Thompson, John Hiatt, Steve Earle, Tom Morello and Kris Kristofferson among others.

Ed is developing a new one man show for 2013 called Eddie’s Bar currently being previewed on a run of U.S. live dates. In January he makes his long-awaited return to the UK and Eire for a series of shows to promote the EP, and is the featured guest on Tom Robinson’s Saturday night show for BBC Radio 6 Music on Jan 19th.

“Lach is the mastermind of Antifolk, like a Lower East Side rendezvous of Bob Dylan and Patti Smith.
Like black snow, stalled subway cars and random violence, Lach is a Manhattan institution.”- NY Times

Born in Brooklyn, Lach arrived in Greenwich Village in the early Eighties and began playing in clubs, such as The Speakeasy and Folk City. Previously considered to be prestigious venues on the folk circuit, they seemed now to Lach, to have become increasingly conservative in their attitudes. “I started the scene in the mid ’80s as a rebellion against the lame so-called folk scene that had congealed in the West Village after Dylan went electric,” reveals Lach. “We were as inspired by The Clash, The Pistols and The Jam as we were by Woody Guthrie, Phil Ochs, and Bob Dylan. But the Folk hierarchy would have nothing to do with our punky, scruffy lot.”

In protest Lach inaugurated what was an illegal, and infamously renowned, after-hours joint called The Fort in a rented loft, on the Lower East Side where he also initiated the first ever New York Antifolk Festival, to contend with the ‘official’ New York Folk Festival. The Fort moved to many locations birthing such acts as Michelle Shocked and Brenda Kahn before settling in at the Sidewalk Cafe on Sixth Street, in 1994. It was here that names-to-be such as Hamell on Trial, Thomas Truax, Daniel Johnston, Jeff Buckley and more recent antifolkers like the aforementioned Moldy Peaches, Jeffrey Lewis, Diane Cluck and Rick Shapiro, took to the stage.

This will be Lach’s fifth tour of the UK since moving to Edinburgh a year ago. “One of the great things about living in the UK now is that I can tour much more frequently and truly build a circuit over here,” explains Lach. “It’s enabling me to play new towns and support the various local Antifolk scenes. It is a bit strange and wonderful. I’m really enjoying this Act 2 of my career.”

Lach will be performing a tour-de-force of songs from all six of his albums as well as unrecorded gems and songs improvised from audience suggestions.

“He’s incredibly bright, he’s influential, he’s funny, he’s smart, he’s got his own, sort of, counter-culture charm. A very intelligent songwriter, funny, poetic. If you actually take the time to read his lyrics there’s always some beautiful bit of thoughtfulness there or something unexpected. He became part of New York folklore.” – Suzanne Vega

“Lach is the best songwriter I’ve ever met.” – Adam Green of The Moldy Peaches

“Five stars! Really quite magical. He’s such an affable, unassuming guy. Lach tells stories. His songs, if you listen to his records, are very infectious and you find yourself with a tune rattling inside your head.” – Colin Somerville, The Herald
“He’s a street-corner ambassador. Lach is beat. He’s a ringmaster. He’s a poet’s poet.” – Michelle Shocked
“Lach is so what the East Village used to be all about. He’s a gruff‑and-tough punk turned poet with a heart o’gold singing jangly, funny, pop‑punk songs.”-TimeoutNY
“Lach put it all together. The godfather of Antifolk!” – Dean Friedman
“He’s an absolute legend.” –Vic Galloway, BBC Radio Scotland
“Incredibly entertaining. The captain of our ship. Not just a singer/songwriter, he’s an entertainer. Punk rock kids are going to relate to it but also I think that the little old ladies in their coach trips could enjoy spending an hour or two in Lach’s company.” –Duglas T Stewart of The BMX Bandits
“Lach is my hero and mentor.” – Hamell on Trial
“Lach is a star! More Woody Allen than Woody Guthrie and a raised middle finger to the folk purists.”-NME
“The best punk rhythm guitarist since Johnny Ramone.”- Billy Ficca of Television
“NYC’s living legend, riotously catchy!”-Timeout London
“4 Stars! Splendid! Best of it’s kind!”- Mojo
“Dangerously fun!”-Uncut
“Genius”-Penthouse