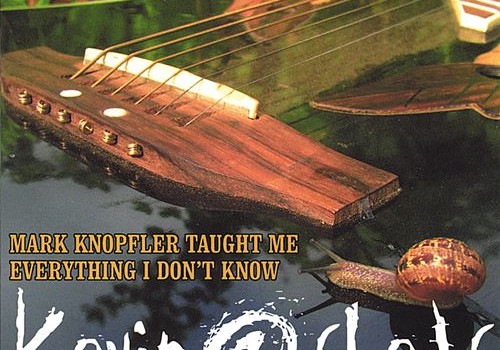 Some say he’s Terry and June’s Lovechild. Others claim he was developed in a polly tunnel by Anti-Folk Scientists mixing the DNA of Graham Coxon and Donovan. He’s known as Kevin 2 Sheds and according to his new CD, Mark Knopfler taught him everything he doesn’t know.

Which is lucky for us, the listener, because ‘Mark Knopfler…’ is neither ‘dire’ or ‘straight’. Autobiographical ballads of unrequited teenage love and costal isolation jostle with tales of lucky charm pensioners and serial masturbators for our aural attention. Lyrically, K2Sheds possesses a considerable wit, songs peppered (excuse the pun) with humour and enough vegetable references to satisfy a harvest festival in a care home.

But it’s with ‘Soil Man’ and ‘Clean Body, Dirty Mind’ that K2Sheds proves himself a songwriter of real depth, much like a pastoral Ray Davies, and these love songs are both tender and charming.

And lyrically, it’s not that K2Sheds expresses what we’re thinking. Quite the opposite; It’s his ability to articulate life in ways we can’t but wish we could after hearing him sing, that makes his songs so good. K2Sheds comic dexterity and sideways take on life (Don’t let the vegetable camouflage fool you) continue the British tradition of the eccentric singer/songwriters.

So, love songs and comic songs in a vegetable stew – Anti-Folk at its very best. Hey, if K2Sheds does a ‘Milk Kan’ and gatecrashes the mainstream, we might even be invited to play swingball with him in his recently feng shui’d spare room, clothes optional. Health and Efficiency –K2Sheds new rock ’n’ roll manifesto? Now there’s a thought…

Jonny T Somewhere in Brighton is Jonny T. Is he in the garden? Is he in the pub? He might be at an antifolk gig.