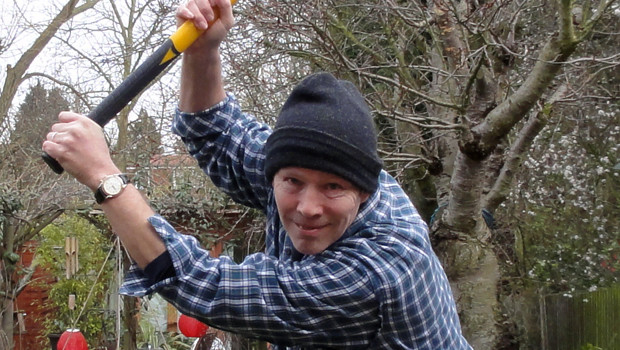 Filthy: Where are you from originally?

Jack: Near Okehampton in Devon, Broadwoodkelly to be precise.

Filthy: I love Devon. Always seems very nice and beautiful when I visit. It reminds me a bit of Anglesey, but with better weather, less poverty and friendly locals. What was it like growing up there?

Jack: In hindsight pretty good. At the time it seemed very dull and lonely. The nearest other farm was half a mile away and no one from the immediate area went to the same comprehensive as me. School holidays were odd, I could go the whole hols only seeing members of my family or the farmers I worked for.

Filthy: So you were the son of a farmer?

Jack: Yes, dairy (farm), a Jersey herd. A small farm,.actually a tough existence as any small dairy farmer will tell you. No holidays abroad for my poor salt Dough Recipe mum and dad! Devon seems a bit idyllic these days but that part of Devon was not prosperous.

Filthy: I was brought up in the sticks too. Did you find you had a lot more time to think compared to your urban peers you would later meet?

Jack: I probably did, there was nothing nearby to do so music, making microphones and amplifiers and radios, and more importantly reading took up my spare time. I thought a lot, and got angry that everybody must be having fun fun fun!

I never went east of Bristol ‘til I was 16 except for a school exchange trip to France. Then I went to Liverpool as a student which was a bit of a shock, but a welcome one.

Filthy: When did you first start playing live?

Jack: Properly, apart from a spell as the guitarist in an Indian ( I don’t mean native american) Country and Western band around the Dartford area, probably about 1995/6 with a band called Spongefinger. Though I played with TV Smith a bit too, he went to the same school as me and the Adverts were very much a Devon band.

I was mostly busy working and being a wild eyed trot.

Filthy: Have you been in many bands over the years?

Jack: Really only Sponefinger, Hefner and Dollboy. The rest has been odd appearances mostly with pedal steel or obscurities. I have been lucky that people seem to like what I do with those instruments, in small doses!

Filthy: It’s fair to say Hefner is the band that raised your profile the most.

Jack: That was quite an accident. I was only meant to play one show with them, at the acoustic cafe to play lap steel on ‘Hymn to the Alcohol’. I was busy Play Dough Recipe with Spongefinger at the time. That was the gig where Hefner suddenly became a band playing to more than just a few mates, just before ‘Breaking God’s Heart’ was released. The queue for that gig went all the way up Tottenham Court Road. Until a week before I’d never heard of them. It all got quite big very quickly after that.

Filthy: How soon after that did you become a part of the line up?

Jack: I played every gig and on every recording from that point on except for one peel session. Darren (Hayman) had endless arguments with the record company about that. They may have been right, a three piece is easier/cooler/ for all sorts of reasons. A three piece with an old pedal steel player less so.

I often think I ruined Hefner. They were really spiky sounding before I started playing with them.

Filthy: Did you enjoy that part of your music career? What do you think now when you reflect on it?

Jack: I really enjoyed every minute. I’d come late to an accidental music career. I was playing with a group of people I came to admire very quickly as musicians and we were more than the sum of our parts live, every show was different in a way that it isn’t for bands who rehearse a lot, sometimes shambolically so.

We worked fast too. Darren is very adept at putting a band together, he has a knack for it. Also I had been pretty much a house husband/gardener/etc for ten years and getting away for those tours was a bit of a shameful holiday for me.

Filthy: Why did Hefner disband?

Jack: We made a lot of records and saw quite a bit of the world. We also all had other projects on the go. I’ve watched other bands who were around stay together and get vastly more successful (like Coldplay), but who got vastly more boring and repetitive too. Coldplay should have stopped at Yellow, that would have been fine as a moment in time, as a one hit wonder.

We had another album in us and we recorded it salt dough ornaments and it came out as the first half of the Catfight double album. It didn’t feel to me at the time that we suddenly stopped, we all played on each others stuff and still do. Bands should have a shelf life!

Filthy: And what about being a house husband? Is it as good as it sounds?

Jack: Being a house husband, poor and hard work if you do it properly as I tried to. Once the kids were both at school it got easier.

Filthy: Ahh, kids. That makes it much harder.

Jack: I imagine being at home all day without kids would be a rather easier scenario for a musician!

Filthy: After Hefner, you started your solo career with the excellent Practical Wireless. Are you still solo now?

Jack: Solo still. Practical Wireless was made at the same time as Dead Media. ie recorded and mixed it Darren’s (Hayman) kitchen.

Filthy: You had a bit of a lull until recently though?

Jack: After Practical Wireless I had to make a living as the Hefner thing had finished and I did a variety of things, mostly motorcycle courier/gardener/freelance IT work. I didn’t stop recording stuff and I did the odd gig but they were mostly poetry shows. I was lucky enough to get odd bits of that published.

Most of the live stuff I did was because Paul aka Spinmaster Plantpot was promoting the Rough Trade Saturday shows in Notting Hill. I did a fair few remixes/setting to music of his rants, I still do that from time to time. I was putting things up on MySpace for friends and thats how the link with Audio Antihero came about, via Ben Shaw.

Jamie at Audio Antihero offered to release the Sucky Tart EP and we’ve worked together since. I think I have probably made him very poor! Sucky tart!

Filthy: How did you meet Spinmaster Plantpot and what do you know of the Antifolk scene?

Jack: Spinmaster was always around the 12 Bar Club, which is where Spongefinger mostly played, and Hefner and ANT and me. Suzanne Rhatigan’s Cushy nights. salt dough handprint Later on when he became Spinmaster I gathered that there was such a thing as Antifolk and that he was something to do with it.

I’ll be honest and say I’m still not very aware of what the agenda is or who the people are, all I know is that when people make interesting music without recourse to large budgets and record it themselves, and regard process as more important than outcome, well thats what I like and admire. Some people who I have known and admired for years and years seem to be part of it. Ed Hamell (Hamell on Trial) for instance, who one evening in Baltimore kept Hefner from destroying itself a couple of years too early!

I was very excited to see you’d interviewed him Filthy. (Hamell on Trial interview)

Jack: He works so hard. Shortly after we met him he had that terrible car crash. I went to see him upstairs at the garage, out of solidarity. I thought I would be the only person there, of course there were many others just like me who assumed no one else would be there!

I still demanded he do the face solo, which he did with the staples all through his skull. Scary hilarious and heroic all at the same time!

Filthy: I saw him perform a couple of months ago, he’s still putting on great shows.

Jack: …and he sweats too. In fact, when I asked my friend Mark Mulacahy if he’d ever met him he looked puzzled and said “do you mean that awful bloke who sweats and dribbles all over the mics, you really don’t want to follow him onto a stage!”.

Americans can be so squeamish. Mind you it may explain why we were ill for most of the US dates that followed that Baltimore show. Ed Hammell aka Hammell on Trial the most rocking solo performance Ive ever seen.

Filthy: We’re planning to get you to play one of the Antifolk festivals this year. You would fit in well. You up for that?

Jack: Of course I’m up for it. It would be a pleasure.

2 Responses to Jack Hayter on Hefner, Devon and being a house husband