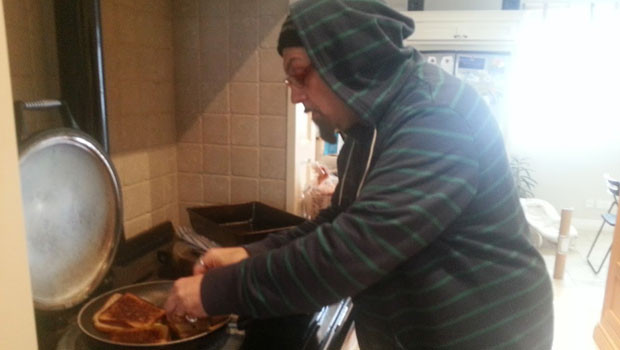 Filthy Pedro interviews Hamell on Trial during his tour of the UK with Lach. The interview takes place at Filthy’s secret base, Castle Pedro.

So here we are in a snowy Sheffield, are you enjoying Britain?

Yes, I always do. It’s certainly it’s cold and snowy this time.

I saw you brought some Pork Scratchings last night?

It was post gig hunger. We call them Rinds, I don’t really eat them. I think I might have dated a girl in my youth that might have given me pork scratchings, and I still have the scars to prove it – emotionally that is.

So you’re on tour with Lach at the moment, how long you known each other for?

How did you get to know each other?

I had fallen in love with a Roger Manning album on SST records, a hardcore label. It’s still, absolutely my favourite antifolk record of all time. (it’s a self titled album). That lead me to the Fort at the Sidewalk, which was Lach’’s deal.

How long have you been involved with the antifolk scene for?

I don’t know if I’m involved with it, but I’ve respected it for 20 years. I’m on the peripheral really. They are always very nice to me, I’ve heard a lot of great stuff. Certainly Kimya Dawson.
There was a band called Testosterone Kills, a couple of gay guys, they were great. There is also a poet there, Jonathan Berger, who is astonishly good, and I really like this girl from Australia, Sarah Turk. Goes by the name Bird To Prey, check her out.

You did a duet with Kimya Dawson recently?

Yea, on my new album ‘Ed Hamell is the happiest man in the world’. It’s called Together.

How many albums have you released?

2 on Universal, 3 for Ani Difranco and self released stuff. I’m with a label called New West now. I’ve done about 10 albums in total.

And you’re still writing as much as ever?

When my marriage broke down I wrote a song every day for 400 days. I’ve added another 90 odd songs since then. There is a YouTube channel, Hamell TV, you can see a bunch of them there..

Are all those 400 songs about the breakup of your relationship?

Some are about the pain of the break up. My son and I were together a lot, so I also wrote children’s songs, holiday songs, funny songs etc. Some were a direct attempt to pull me out of the horrific melancholy I was feeling.

Half the songs on my new album and from those sessions. I used some songs to rediscover happiness, so that despite what had happened, I’m reaffirming my happiness and that I’m going to be the happiest man in the world.

Was it a bad split?

It’s sad. She was a wonderful woman, married for 24 years, so it was really broke my heart. But it was a compassionate and understanding split in most other ways.

Yea, a little bit outside in Westchester, about 20 mins north.

I hear you gig a lot.

That’s how I make my living, that and I paint.

How many gigs do you do a year?

Do you find you enjoy it, having to play so many gigs?

I do love to play, I still have the childlike joy of creating music live. It can be problematic, but I bring my son with me a lot. We’ve had some great adventures.

I’ve had a great road manager for 10 year, Ricki C, I miss him, but he’s retired now, and my son is great company and I have good friends in every country and city I visit, including the UK and the rest of Europe. If you’re not careful Filthy Pedro, you might become one.

If one is wealthy by the amount of good friends you have, then I’m the richest son of a bitch I know, and I’m not kidding.

You have your son’s name tattooed across your chest?

Yea, I felt it was time to commit (*Hamell opens his shirt to show the word ‘Detroit’ across his chest*).

Why did you pick Detroit for his name?

Well, if truth be told, Detroit music is unquestionably the music I have the greatest affinity for. You can go back to MoTown or Mitch Ryder and the Detroit Wheels to the MC5 and the Stooges, right up to the White Stripes and Eminem. There is a certain muscle to the music that appeals to me. I would say I play detroit music.

Where are you off to next?

I’m off to Nottingham, then London and Glasgow. I’m then off to Ireland and after that back to US; Brooklyn & Pennsylvania. I have to go back in the studio to make two more songs. I’ve been selling a best of CD, but I need to get a few more songs recorded. I’ve got a feeling it’s hopefully going to be a big year. I’ve got this new album coming out and the I’m getting over the break up of my marriage.

OK, we’re done Hamell, interview finished. Time for lunch. What do you fancy?

Do you have a grilled cheese sandwiches?

Do you mean cheese on toast in sandwich form?

I tell you what, I’ll cook you a cheese grilled sandwich.

What I really fancy though is holding my son’s hand, or putting my head on my girlfriend’s lap. That’s the hardest thing about touring.