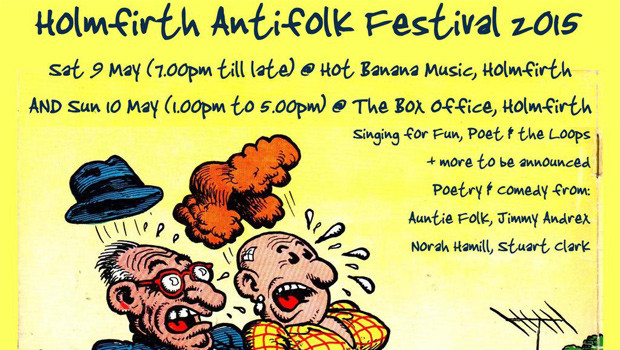 The second ever Holmfirth Antifolk Festival takes place on Saturday, 9th May 2015 at Hot Banana Music.

It’s great to see that the Holmfirth Antifolk Festival is taking place again this year. I went along and played at the first one last year, upstairs at the Hot Banana Music shop, situated above the music shop in a very crowded room. Holmfirth is a lovely old Yorkshire town, made famous by the vintage television comedy ‘Last of the Summer Wine’.

It takes place during the annual Holmfirth Folk Festival, and promotes local artists who for various reasons don’t get a look in at the larger Folk Festival as well as those artists whose style we might more associate with the Antifolk movement.

Entry is free and it’s a two day event this year, with an afternoon session at the Box Office on the Sunday. More details below:

This isn’t in any type of order.