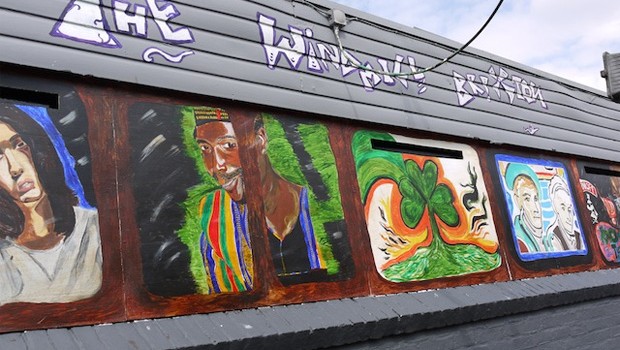 The Brixton Windmill is one of those great little out of way venues, that has a pretty respectable track record, having hosted everyone from Clor to The Rakes.

From the outside it resembles a wooden shed, from the inside it’s an intimate space, with a bar that runs all the way down to the darkened little corner where you’ll find the stage.
The first band I saw were Candythief who exude a cool calm groove. It’s nice, and tuneful enough, doesn’t really move me a lot, but is quite pleasant. Singer Diana looks quite cute, and is wearing a tasteful black dress with fishnets – the band are definitely well dressed. Remarks from the crowd are that the bass player is quite nice, but the skinny electric bass he’s playing is even nicer. The music has a nice settled groove, and she’s a bit like KT Tunstall, just not as catchy. It’s reminiscent of a Christmas party band, the kind of party where no-one drinks too much, but has a very nice time.

Next up the Happy Attack cram onto the stage. You can already tell they have a sense of humour, they’re all wearing bright yellow t-shirts with ‘Happy Attack’ on them, and on the back it says ‘You might not know this, but I’m in Happy Attack’. They start in with their white boy hip hop and I find myself being joyously (and forcibly) transported back to 1991.

The first song must be called ‘Super Crazy Disco Party’ as these are the words they repeat over and over again. At this point I’m still a little sceptical to say the least, and thinking “Ah well, they’re having a good time. I’m sure their friends like them.” They’re tossing out Santa hats and reindeer horns to the crowd, and the whole thing’s starting to resemble some sort of Christmas piss-up/stag night/karaoke session. It’s a bit Beastie Boys, but a lot more Goldie Lookin’Chain. Just when I think their only redeeming feature is their one man horn section on trombone, and a timely Thomas the Tank Engine sample, they suddenly win us over with a moving Christmasy interlude, – three horn players serenading us with a carol. From there it fully descends into a karaoke party, I stop cringing and start laughing – and singing along! Well why not, it’s Christmas!!

After a few choruses of Shaggy’s ‘Sweat’ the obvious thing to follow that is ‘Saviours Day’ (which I’m reliably informed was Christmas No. 1 in 1988, thank you quizmaster Scopie). Then there’s some dancing and raving, and freeze frame posing from the whole crew, followed nicely with ‘Mistletoe and Wine’. By now we’re linking arms, swaying and singing. The mood’s completely taken over. We don’t quite know what to make of it all. Sarah ‘Bunnyhops’ does though. She insisted on being quoted – “Look, it’s too much. One Cliff Richard song is more than enough in a Cliff Richard set, let alone Happy Attack’s!”

Well, we won’t forget their name, that’s for sure.

And so, time for Filthy Pedro and the Carthaginians. Tonight they’re dark and shambolic in a really good way, and the dimly lit stage is the perfect setting for them. I’m watching really great party songs played by some of my friends, so I’ll tend to be forgiving. What we have here is our favourite AFUK good guy, and his motley crew of troubadours. He smiles and strums his way through his set, as Cigarface kinda slurs his basslines – apart from on Rock’n’Roll points, which is, curiously, almost note perfect.

He is a little less pissed than when I last saw them play though. Thee Intolerable Kidd joins them tonight to sing with Filthy on the first song, and play long gritty guitar solos in quite a few others. There’s a slight pause while we wait for Claudius to tune his fiddle. Then it’s time for Filthy to lose his shirt and wear the mighty Gilgamesh mask for that beast of a song, which lurches into bedlam for the big ending, Penny O screeching out her highest notes as she sings his name over the noise. We love your work Filthy!

It’s a bit of a special gig for David Cronenberg’s Wife tonight. It was a reminder of why they’re one of my favourite bands.You could tell that Tom had flown in especially for this gig – and he had a 6am flight the next morning, so he was gonna make this one count. From the very first second it was all on, they ripped into ‘I Couldn’t Get Off” with a burst of energy, he had his guitar held up in the air and was jumping all over the stage. Start as you mean to go on, alright.

Tonight’s set was an inspired, awesome display of commitment and passion from one of the mightiest live bands I’m lucky enough to know about. ‘I’m on the Booze Mama’ charged along on the edge of madness, as people threw themselves around to the beat. ‘Dude of Love’ sounded massive in this tiny room, and they had our full attention as we got washed away on the final moments of storytelling this evening. One of the special things about this gig was, at the risk of sounding cliched, the obvious commitment they showed to the small crowd still there to see them. They played as if the room was completely packed, and we loved every minute of it. Another fantastic night out, I thought.