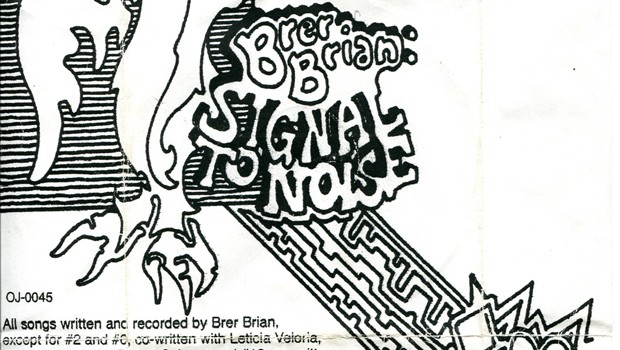 It’s my first album review, I hope I do it justice…

I feel like I’ve owned Brer Brian’s Signal to Noise for a lot longer than the two months I’ve actually had it. Like having a favourite cosy jumper that you always wear when you want to feel good, this album already is a favourite when I want to listen to something heart warming. That is not to say it’s safe and plain, far from it.

For those who believe first impressions count Letter from the Great I Am is a perfect example of how to create a dazzling first impression. The guitar intro and vocals deeply and confidently introduce Brer Brian raw, original style.

Other songs that you should look out for are Cigarette (they cost too much) starts off with Spanish (?) style guitar and turns into distorted rant and the child sayings smokings bad.

Title track Signal to Noise a beautiful happy and relaxed sort of song.

Brer has great song titles, The album provides great names for the tracks such as I’m allergic to beans and domenican (so what, I don’t give a fuck) and I got some candy (and you can’t have it). There should more titles like that around.

It certainly sounds like a good time was had making signal to noise not only for songs such as Lift up your kilt (and show us your balls) – a typically Irish drinking song but the musicianship as well. This track was orignially created for the Artstars compliation. With every song there is something new to discover in Brer Brian.

Signal to noise ends with the epic that lasts for 12 minutes and 13 seconds. I’ve seen recently a post on the Antifolk message board requesting Brer Brian play at an UK Antifolk Festival in the near future, please do!

While I’ve been writing this review we’ve had a builder in (typical cockney builder) he had no hesitation in telling me he didn’t like the music, but what does it matter what the builder says? I definitely know I like Signal to Noise and stick by that. If you haven’t already done so try and get a copy of the album, you won’t regret it.