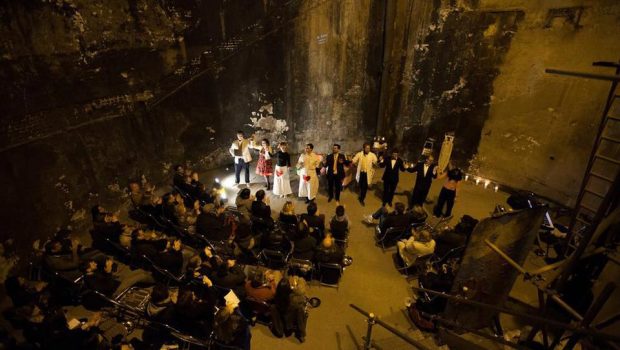 Crooked Tree Theatre recently caught our attention, not only through their clever use of antifolk music, but also through their no-nonsense DIY approach to putting on productions. Filthy Pedro caught up with Crooked Tree founder Dan Tremor to get the lowdown on the group and their next show, which takes place on October 21/22 in the Brunel Tunnel, Rotherhithe, London (pictured above!)…

We’ll be turning the Grand Entrance Hall of the Brunel Tunnel into our own Crooked Cabaret of Curiosities – a museum and showcase of theatrical and musical oddities. The walls will be lined with exhibits, which the Curator will tell the audience about as he guides them through the show. We’ve got six music acts involved in the show: David Cronenberg’s Wife, Bridport Dagger, Men Diamler, Paul Hawkins & The Awkward Silences, The Rattlin’ Caskets and, on the 22nd only, The Rebel. And we’ll be debuting a double bill of Grindhouse plays I’ve written: The Lynch Mob and Eternal Shade.

The Lynch Mob is a psycho-fag-trash-noir through the Bible Belt, set at the end of the ‘60s – it’s about a gay couple on a killing spree and the corrupt detective/jesus-freak who’s hunting them down. Kind of like a queer Bonnie & Clyde or Natural Born Killers, with an original score written and performed by Bridport Dagger.

Eternal Shade is set in a cabaret bar/fetish club in Berlin, 1934, and is about a drag queen who’s reluctantly won the heart of a Nazi. It was inspired by the Night Of The Long Knives, when Hitler had the Gestapo execute loads of members of the Sturmabteilung, his own private army, and political opponents. David Cronenberg’s Wife will be performing some of their songs in the play, including a new one written specifically for it.

There’s also collaborations with Men Diamler and Paul Hawkins & The Awkward Silences, and a warped death-country set from The Rattlin’ Caskets – a collaboration between members of Bridport Dagger and Crooked Tree. And finally, on the Saturday we have The Rebel closing the show as our headliner. It’s about three and a half hours, including two intervals, of strange stories, live music and pitch-black humour.

Tell us about Crooked Tree – what made you start it?

I was at uni and fed up with seeing the same people act in the same kind of plays, over and over again. It was mainly rehashes of National Theatre productions and endless musicals done in the same way. Student writing wasn’t really being nurtured – apart from the poetic silliness of the Underground Clown Club, who are excellent and currently touring – and the majority of people were more interested in becoming the next Jennifer Lawrence or Cumberbatch than experimenting with theatre.

So I formed my own theatre company with the idea of combining the DIY ethics of punk with experimental theatre, dark humour and weird music. I got the chance to adapt Irvine Welsh’s Trainspotting to stage and directed a production at uni. After rehearsal one night, I stood up on the table in the pub and gave a pissed speech welcoming the cast into Crooked Tree – on the condition that everyone leaves their ego at the door. I don’t have time for the narcissism that’s rife within the theatre. Too many people have confused wanting to be a performer with wanting to be famous. We’re here to put on a show, not to go on stage and have the audience massage our egos. 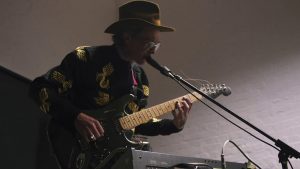 Would you say Crooked Tree is a kind of “antifolk theatre” or “anti-theatre”?

A friend of mine called it Theatre Of The Down-Trodden the other day, which has a nice ring to it. But yes, if by theatre we’re talking about the mainstream, money-driven theatre industry, then I’d say that Crooked Tree is anti-theatre. That’s not to say we hate all mainstream theatre- there’s some really great stuff – I’m a big fan of Martin McDonagh – but most of it just doesn’t interest us. We’re more associated with musicians and bands, as music is what influences us the most. We use songs as references when developing productions – I usually create a playlist for the cast and crew to give them an idea of the feel of the show. The rest comes from cult films and books, comics, drag, true crime, conspiracy theories, and our other obsessions and neuroses. Very little of it comes from theatre, at least not consciously…

How does the DIY ethos lend itself to theatre?

As I said, we’re not fond of the theatre industry so the DIY ethos is great for removing a lot of the unnecessary stresses and bullshit. We’re free to do shows about whatever we want and it’s really just a matter of getting up off our arses and jumping into it. Write the play, learn the lines, rehearse it. Find the venue, sell the tickets, perform it. We try to do our shows as cheaply as possible, that way costs are easy to cover and we are forced to focus on improving the writing rather than relying on flashy stage effects; which I think a lot of the big-budget shows are guilty of doing. And despite what people think, taking the DIY approach means you have to be on it, act like a professional and not a prima donna, otherwise it all goes to shit. Our Managing Director, Rosie Beard, runs a very tight ship, and she knows exactly how to rein me in when I start insisting the show needs 20 tap-dancing Nazis singing Mary Hopkin’s “Those Were The Days”…

How do you think people from a more traditional theatre background view what you are doing?

I’m not too sure. It’s not something I really think about. We know there’s some who hate what we do – they see it as crass. Which it is, but not without purpose. John Waters is a massive influence on us and we’re big fans of Grindhouse/B-movies, we embrace that trashiness and add our own dark satire. And like with everything else, the theatre is becoming even more gentrified, it likes its trash to be neatly packaged and recyclable – which isn’t us. But there are those who get what we’re doing and absolutely love it. They find it refreshing because I think, for all its good intentions, the PC culture we’re in has stagnated a lot of entertainment. Some people don’t like to be patronised, they like to formulate their own opinions, laugh at dark jokes and aren’t offended regardless of context. We describe it as humanity desperately trying to paint the decking of a sinking ship, and we’re in the bar performing to those who’ve accepted the inevitable and want to laugh along at the spectacle – and I think that makes some people from a more traditional theatre background uncomfortable.

How did you get into antifolk? Who are your favourite acts?

I was listening to a lot of Crass, came across the Jeffrey Lewis album 12 Crass Songs and I absolutely loved it – then I found “Chelsea Hotel Oral Sex Song” and I was hooked. I’m a massive fan of David Cronenberg’s Wife and Paul Hawkins & The Awkward Silences, they’re extremely talented songwriters with a particular skill for capturing the perversely funny in the tragic and twisted. We’ve used DCW’s music in our last 3 shows and “You Should’ve Closed The Curtains” has become our theme song – I now try to get it in somewhere in every show.

Extradition Order are incredible, I can’t go a fortnight without listening to their Kennedy album. Thomas Truax is a genius and a gentleman, reminds me of Harry Partch. Emily Capell is a force of nature, her new single with Milk Kan is great. Milk Kan are awesome, I love their unofficial duet with Dolly Parton. Malcolm Kaksois is hilarious, he has that surreal brilliance (“You can’t knock on a wigwam!”), and Buzfuz should be the Mayor of London. And how can you not love Filthy Pedro? The man needs to release another album!

I’m working on it!…. What’s next for Crooked Tree?

Work is starting on the currently-unnamed Crooked Tree podcast, which will be a mix of radio plays, sketches, monologues, antifolk/indie music, and new collaborations with more bands and musicians. It’s going to be dark and surreal, taking inspiration from Blue Jam, Tales Of The Unexpected, The Gonzo Tapes, serial killer interviews, B-movies and folklore. Our first short film festival will happen in early/mid 2017, featuring music videos we’re making for some antifolk acts and shorts by us and like-minded people. And Crooked Tree’s Scribbletwat – Designer/Co-Founder, Oscar Balfour – and I are working on a dystopian comic-strip with plenty of unsettling, surreal humour and a standalone pulp comic in a similar vein to Transmetropolitan and Preacher.

We’re also doing a lot more music: the first EP by The Rattlin’ Caskets (White Trash Taxidermy) is almost finished and we’re starting to slowly piece together the next one. And it’s the 50th anniversary of Joe Meek’s death in February, so we’re planning to do an event called The Meek Shall Inherit The Earth! It will be a celebration of his life and music with Men Diamler and a few others from the Crooked Cabaret Of Curiosities.

No rest for the crooked. 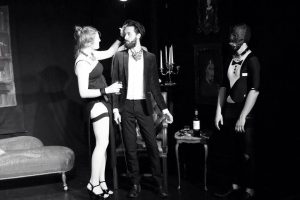 A shot from ‘Family Duels’, a 2015 Crooked Tree Production 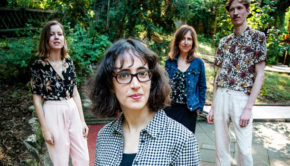